Valued at $13 million, the contract is expected to be completed by Oct 31, 2023. Per the terms of the deal, Lockheed will provide software upgrades, support and non-recurring engineering redesign for the Apache modernized radar frequency interferometer sensors system.

Work related to this deal will be carried out in Oswego, NY.

The AH-64 Apache is an American twin-turboshaft attack helicopter with a tailwheel-type landing gear arrangement and a tandem cockpit for a crew of two. It features a nose-mounted sensor suite for target acquisition and night vision systems. The stealth helicopter boasts diverse, multi-mission capabilities that enable the military to carry out airborne missions effectively.

Due to its remarkable features, its demand may continue to witness a northbound trend, thus enabling Lockheed to win more contracts, with the company providing electro-optical sensors and radar technologies for this stealth helicopter. The latest contract win is a testament to that.

The military landscape worldwide is currently witnessing modernization and replacement of age-old defense products to strengthen defense systems. The upgraded and best-in-class military equipment can provide countries with a shield against any sudden assault and deter any war-like situation.

In this context, an efficient military helicopter that has the capability to withstand any airborne military threat is poised to witness an increase in demand going forward.

Per Mordor Intelligence projections, the global military helicopter market is expected to witness a CAGR of more than 4% from 2022 to 2031. Such projections exemplify immense opportunities for defense majors to reap the multitude of gains from the expanding market size.

Raytheon Technologies’ Collins Aerospace is one of the world’s leading providers of advanced systems for commercial and military helicopters. It includes helicopters ranging from modernized heavy-lift, utility and SAR helicopters, namely the CH-53K, HH/UH-60M, CH-47F, MH-47G, MH-60L/M, MH-60T and S-70i and cockpit upgrades for CH-47SD and other older aircraft.

Raytheon Technologies has a long-term earnings growth rate of 10.4%. The Zacks Consensus Estimate for RTX’s 2022 sales implies a 6.1% improvement from 2021’s reported figure.

Textron boasts a long-term earnings growth rate of 12.5%. The Zacks Consensus Estimate for TXT’s 2022 earnings indicates a growth rate of 6% from the prior-year reported figure. 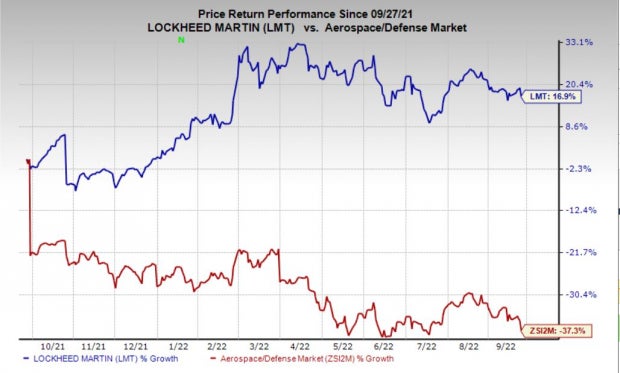