It seems to be the perfect time to invest in bank stocks. Supported by interest rate hikes and decent growth in loan balances, banks are expected to witness improvements in their top lines. Therefore, we bring one such stock — East West Bancorp, Inc. (EWBC - Free Report) — which is a solid pick based on its fundamental strength and improving prospects.

Analysts seem to be optimistic regarding the company’s earnings growth potential. The Zacks Consensus Estimate for EWBC’s current-year earnings has been revised nearly 1% upward over the past 30 days. Thus, the company currently carries a Zacks Rank #2 (Buy).

Over the past three months, shares of EWBC have gained 8.6% against the 2.5% decline recorded by the industry. 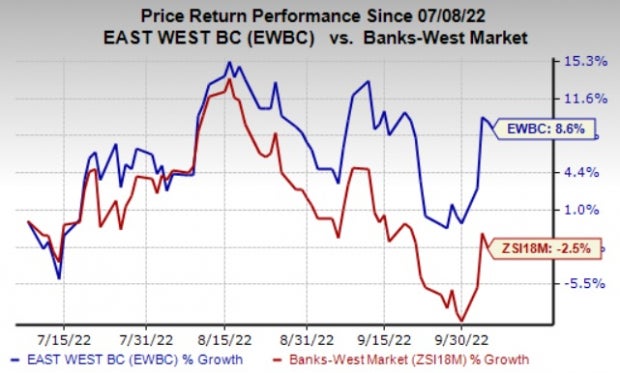 Here are some of the key factors that make the EWBC stock an attractive pick right now.

Earnings Growth: East West Bancorp witnessed earnings growth of 10.9% in the past three to five years. The upward momentum is likely to continue in the near term, as reflected by the company’s projected earnings growth rate of 28.5% for 2022 and 15% for 2023.

Revenue Strength: The company’s organic growth trajectory looks impressive. While net interest income (NII) (the primary source of its revenues) declined in 2020, the same witnessed a CAGR of 5.8% over the last five years (2017-2021). Over the same period, total loans recorded a CAGR of 9.5%. The uptrend in revenues and loans continued in the first six months of 2022. Supported by the rise in interest rates and growth in loan balances, EWBC’s top line is expected to improve further.

Robust Balance Sheet: As of Jun 30, 2022, EWBC had total debt of $939.2 million, while cash and cash equivalents were $1.9 billion. It has investment-grade credit ratings of BBB from both Standard & Poor and Fitch Ratings. This renders the company favorable access to the debt markets. Thus, given a record of consistent earnings growth and sufficient liquidity, as well as a solid credit profile, the company is expected to be able to continue meeting debt obligations in the near term, even if the economic situation worsens.

Efficient Capital Deployments: East West Bancorp’s capital deployment activities seem impressive. This January, the company hiked its quarterly dividend by 21%. This followed a 20% hike in both January 2021 and April 2019, 15% in July 2018, and 11.1% in January 2015.

Also, the company has a share repurchase plan. As of Jun 30, 2022, it had $254 million available under the buyback authorization, which was announced in March 2020. EWBC’s capital deployment plan looks sustainable, given a solid capital position and earnings strength.

Superior Return on Equity (ROE): East West Bancorp has an ROE of 16.45%, higher than the industry average of 12.45%. This shows that the company reinvests its cash more efficiently than its peers.

Strong Leverage: The company currently has a debt/equity ratio of 0.06 compared with the industry average of 0.22. This highlights that EWBC is better positioned than its peers. The company will be more financially stable than its peers in adverse economic conditions.

Other Bank Stocks Worth a Look

The Zacks Consensus Estimate for JPMorgan’s current-year earnings has been revised marginally upward over the past 60 days. Shares of JPM lost 5.4% in the last three months.

Associated Banc-Corp recorded a marginal upward earnings estimate revision for 2022 over the past 60 days. The ASB stock has gained 17.3% over the past three months.