Revenues came in at $15.4 million, beating the Zacks Consensus Estimate and our estimate of $12 million and $12.9 million, respectively. Revenues were up 66.9% year over year, driven by non-cash royalty revenues and higher license and milestone fees.

ImmunoGen entered into a global multi-year licensing agreement with Lilly in February 2022. Per the deal, ImmunoGen granted Lilly exclusive rights to research, develop and commercialize antibody-drug conjugates (ADCs) combining targets selected by the latter based on the former’s novel camptothecin technology.

ImmunoGen has an agreement with Novartis to discover and develop targeted anticancer therapeutics using antibodies to several antigen targets. In August 2022, Novartis terminated certain remaining development and commercialization licenses. Immunogen had $2.8 million of deferred revenues associated with the terminated licenses, which have been included as revenues in license and milestone fees in the reported quarter.

During the quarter, research and development (R&D) expenses increased 78.5% from the year-ago quarter’s level to $59.2 million, driven by increased expenses of personnel and temporary staffing and expenses related to contract services and clinical studies. The R&D expenses also increased due to a rise in external manufacturing costs incurred in anticipation of a potential U.S. launch of mirvetuximab.

General and administrative expenses were up 226.5% year over year to $33.6 million in third-quarter 2022. This was caused by costs related to building commercial capabilities for the anticipated U.S. launch of mirvetuximab in fourth-quarter 2022.

ImmunoGen raised its guidance for 2022.

The company expects revenues for the full year in the range of $80-$90 million, up from its previous guidance of $75 - $85 million.

Shares of the company have plunged 24.9% this year compared with the industry’s 32.7% decline. 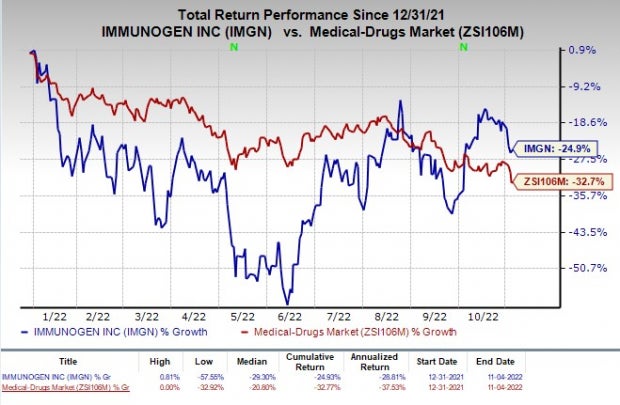 The company now expects operating expenses in the range of $320-330 million, up from the earlier projected levels of $285-$295 million.

IMGN expects to end 2022 with cash and cash equivalents in the range of $230-$240 million, down from its previous guidance level of $245-$255 million. The company anticipates cash resources to be sufficient to fund operations into 2024.

The above figures do not take into consideration any anticipated revenues generated from product sales of mirvetuximab soravtansine.

In March 2022, IMGN submitted a biologics license application (BLA) to the FDA, seeking accelerated approval of mirvetuximab in platinum-resistant ovarian cancer. The filing was based on data from the pivotal phase III SORAYA study, which evaluated the candidate as monotherapy in the given indication. In May, the FDA accepted its BLA for mirvetuximab and granted a priority preview. With the FDA granting priority review to the BLA, a decision is expected later this month

ImmunoGen is currently on track with its confirmatory phase III MIRASOL study, evaluating mirvetuximab soravtansine as a monotherapy in patients with platinum-resistant ovarian cancer with FR alpha-high. It anticipates top-line data in early 2023. The company previously expected the top-line data readout from the MIRASOL study in the third quarter of 2022. The delay in the readout is due to the recent forecast of projected progression-free-survival events, which are anticipated to accrue in the fourth quarter of 2022. Data from this study will support continued approval of mirvetuximab in the given indication. The company will seek full approval for mirvetuximab soravtansine in the given indication based on MIRASOL study data.

Other than mirvetuximab soravtansine, the company has another promising candidate, pivekimab sunirine (formerly IMGN632), in its pipeline. IMGN is evaluating pivekimab sunirine as a monotherapy in the pivotal phase II CADZENA study in patients with blastic plasmacytoid dendritic cell neoplasm (BPDCN).

In September, Immunogen provided an update on the CADENZA study. The preliminary data exhibited significant activity and favorable tolerability in the de-novo patients and patients with prior or concomitant hematologic malignancy (PCHM). However, following a type B meeting with the FDA, ImmunoGen decided to update the study to focus on efficacy analysis in just de novo BPDCN patients with the primary endpoint of complete response/ clinical complete response (CR/CRc). The study’s secondary endpoint is the duration for which the CR/CRc is maintained in the patients. The company now expects to achieve results from the de novo patients’ study by 2024.

ImmunoGen also said that it will continue to enroll PCHM patients to evaluate the potential of pivekimab in this population. For the study on PCHM patients, achieving a complete response with hematologic recovery (CRh), even though it is not the study’s primary endpoint, can also be an important clinical benefit.

ImmunoGen is also evaluating its phase I candidate, namely, IMGC936 an ADC in co-development with MacroGenics, Inc. in multiple solid tumor types, and IMGN151, in patients with recurrent endometrial cancer and recurrent, high-grade serous epithelial ovarian, primary peritoneal or fallopian tube cancers. The preliminary efficacy data for the IMGC936 study is expected by the end of 2022.

A better-ranked stock in the same sector is Aeries Pharmaceuticals , carrying a Zacks Rank #2 (Buy) at present. You can see the complete list of today’s Zacks #1 Rank (Strong Buy) stocks here.

Aerie Pharmaceuticals’ loss estimates for 2022 have remained steady at $1.82 in the past 30 days. Shares of AERI have returned 116.8% year to date. Earnings of AERI beat earnings estimates in three of the trailing four quarters and missed the same in the remaining occasion, witnessing a surprise of 82.23%, on average.

What to Expect for Builders FirstSource's (BLDR) Q3 Earnings?