The latest FDA nod was based on data from a phase III study – AHOD1331 – conducted by the Children's Oncology Group and funded by the National Cancer Institute. Data from the same showed that treatment with Adcetris in combination with standard-of-care dose-intensive chemotherapy AVE-PC (adriamycin [doxorubicin], vincristine, etoposide, prednisone and cyclophosphamide) had superior event-free survival compared with patients who received standard of care chemotherapy ABVE-PC (Adriamycin [doxorubicin], bleomycin, vincristine, etoposide, prednisone and cyclophosphamide) alone.

Also, treatment with the Adcetris combo resulted in a 59% reduction in the risk of disease progression or relapse, second cancer or death in the given patient population.

Please note that the Adcetris label carries a boxed warning, which says that the JC virus infection resulting in progressive multifocal leukoencephalopathy and death can occur in patients treated with it.

Shares of Seagen have lost 15.2% so far this year compared with the industry’s decline of 21.2% 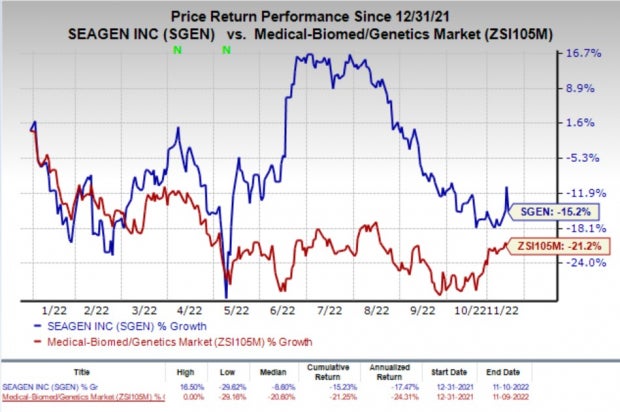 Seagen’s top line mainly comprises contributions from Adcetris sales. The drug contributes to the majority of the company’s top line.

In the first nine months of 2022, Adcetris generated sales worth $601 million, reflecting an increase of 14% year over year. Successful label expansion of the drug is likely to boost sales further in the days ahead.

In a separate press release, SGEN announced that it has appointed David R. Epstein as the new chief executive officer (CEO) of the company.

In May 2022, Dr. Clay Siegall, Seagen’s former CEO, resigned from all his current positions. The company announced that Dr. Siegall was on a leave of absence after he was allegedly arrested for an incident of domestic violence.

Seagen is a leading developer of transformative cancer medicines, boasting a strong pipeline of innovative therapies.

Though the company is making good progress with its portfolio of marketed drugs, it remains to be seen whether the new CEO can continue the impressive growth trajectory and drive revenues further in future years.

Earnings of Aeglea BioTherapeutics surpassed estimates in two of the trailing four quarters and missed the same on the remaining two occasions. AGLE witnessed an earnings surprise of 3.60% on average.

Earnings of Amarin surpassed estimates in two of the trailing four quarters and missed the same on the other two occasions. AMRN witnessed a negative earnings surprise of 14.29% on average.

Earnings of ASLAN Pharmaceuticals surpassed estimates in two of the trailing four quarters and missed the mark on the remaining two occasions. ASLN witnessed an earnings surprise of 1.64% on average.