The company filed a biologics license application (BLA) with the FDA for mirvetuximab soravtansine as a monotherapy in patients with ovarian cancer with one to three prior systemic treatments in March 2022. The BLA was accepted for priority review by the FDA in May 2022.

Post the announcement, ImmunoGen’s shares surged 10.24% after market hours. However, the stock has declined 21.1% in the year-to-date period compared with the industry’s fall of 29.9%. 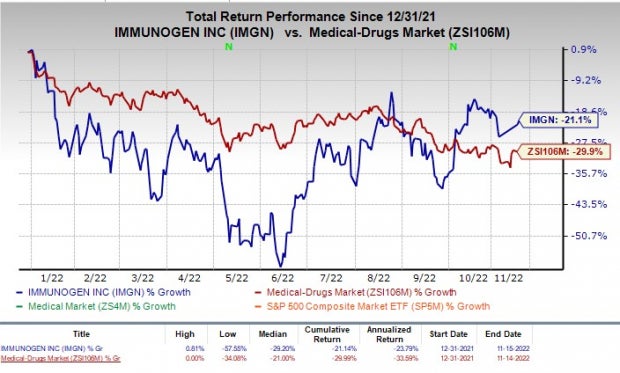 Per the company, platinum-resistant ovarian cancer has had no new FDA-approved therapies since 2014. The accelerated approval for Elahere is a massive step forward in the ovarian treatment paradigm.

The accelerated approval for Elahere is based on the data from the pivotal SORAYA study, which evaluated patients with platinum-resistant ovarian cancer whose tumors expressed high levels of FRα who have received one to three prior systemic treatment regimens, out of which one included treatment with Roche’s (RHHBY - Free Report) Avastin (bevacizumab). The primary endpoint of objective response rate (ORR) and the secondary endpoint of the duration of response (DOR) was achieved.

The drug’s continued approval is dependent on the verification of Elahere’s clinical benefit in a confirmatory study, MIRASOL. The FDA had requested ImmunoGen to submit preliminary ORR and DOR data from both arms of the MIRASOL study during the review of the biologics license application (BLA) review.

The MIRASOL study, designed to convert the accelerated approval of Elahere to full approval, is currently fully enrolled. The top-line data from the same is expected by early 2023.

Other than mirvetuximab soravtansine, the company has another promising candidate, pivekimab sunirine (formerly IMGN632), in its pipeline. IMGN is evaluating pivekimab sunirine as a monotherapy in the pivotal phase II CADZENA study in patients with blastic plasmacytoid dendritic cell neoplasm (BPDCN).

Catalyst Pharmaceuticals earnings per share estimates for 2022 have improved by a cent to 71 cents in the past 30 days. The same for 2023 has remained steady at 85 cents in the same time frame.

Earnings of Catalyst missed estimates in two of the trailing four quarters, while beating the same in the remaining two occasions. The average negative earnings surprise for CPRX is 4.10%.

Earnings of Esperion beat estimates in three of the trailing four quarters, while missing the same on the remaining occasion. The average earnings surprise for ESPR is 7.30%.