Over the past five years, the company registered earnings growth of 12.9% compared with the industry’s 11.9% rise. The company’s long-term expected growth rate of 8.2% compares with the industry’s growth projection of 9.5%. AmerisourceBergen’s earnings surpassed the Zacks Consensus Estimate in three of the trailing four quarters and missed the same in the other one, the average surprise being 2.5%.

AmerisourceBergen is witnessing an upward trend in its stock price, prompted by its robust World Courier business. The optimism led by solid fourth-quarter fiscal 2022 performance and strength in its U.S. healthcare solutions business are expected to contribute further. However, stiff competition and headwinds from contract renewals persist. 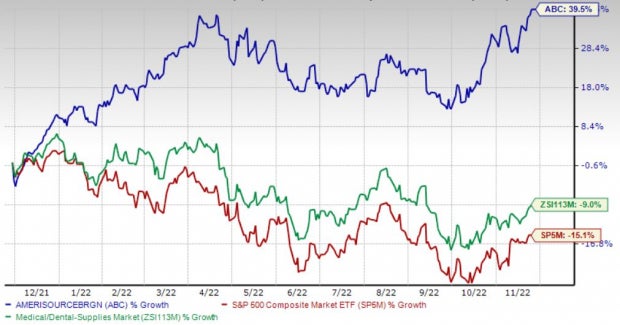 Strength in World Courier Business: Investors are upbeat about World Courier’s solid foothold in global specialty logistics services, which has been driving compelling volume growth and overall performance for ABC. The business has been delivering robust results in recent times and the fiscal fourth quarter of 2022 was not an exception.

Strength in U.S. Healthcare Solutions Business: Investors are optimistic about the segment deriving benefits from increasing volume and an expanding customer base. In fiscal fourth-quarter 2022, this segment reflected a strong year-over-year revenue uptick on the back of an increase in specialty product sales coupled with overall market growth.

Contract Renewals a Headwind: The company’s largest customer, Walgreens, accounted for a significant proportion of total revenues. The loss of any major customer will adversely impact the top line. AmerisourceBergen extended its 10-year pharmaceutical distribution agreement with Walgreens Boot Alliance for three years. The contract will now expire in 2026. Hence, the possibility of a headwind in the near term remains.

AMN Healthcare, carrying a Zacks Rank #2 (Buy) at present, has an estimated long-term growth rate of 3.3%. AMN’s earnings surpassed the Zacks Consensus Estimate in all the trailing four quarters, the average beat being 10.9%.

AMN Healthcare has gained 5.9% against the industry’s 31.2% decline in the past year.

ShockWave Medical, carrying a Zacks Rank #2 at present, has an estimated growth rate of 23.6% for 2023. SWAV’s earnings surpassed estimates in all the trailing four quarters, the average beat being 146.1%.

ShockWave Medical has gained 45.4% against the industry’s 25.2% decline over the past year.

McKesson, carrying a Zacks Rank #2 at present, has an estimated long-term growth rate of 10.1%. MCK’s earnings surpassed estimates in two of the trailing four quarters and missed the same in the other two, the average beat being 4.8%.

McKesson has gained 71.7% against the industry’s 8.9% decline over the past year.

Editas (EDIT) Declines More Than 30% in 3 Months: Here's Why