Shares of Big Lots, Inc. (BIG - Free Report) fell nearly 9% at the close of the trading session on Dec 1, following the weak third-quarter fiscal 2022 results. Results were affected by the challenging macroeconomic environment.

However, the company made efforts to stay afloat during the quarter via cost-management actions and strengthening the balance sheet. It has been on track to transform its business by offering amazing deals, particularly in toys, home appliances and soft home, as well as improved assortments.

In the past three months, shares of BIG have declined 15.5% against the industry’s 10.1% growth. 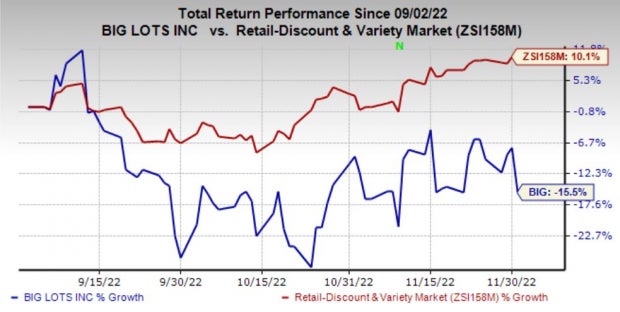 The E-commerce business was solid in the reported quarter. On a year-to-date basis, the metric grew 12%, accounting for 7% of its sales. Some notable efforts in this space include multiple same-day and next-day delivery options, ship-from-store service, extended aisle assortment in its shipping channels, the introduction of payment options such as Paypal and Apple Pay, reducing friction at checkout, and improved inventory.

Gross profit declined 21% year over year to $409.5 million and lagged our estimate of $425.7 million. Big Lots’ gross margin contracted 490 bps to 34% from the year-ago quarter’s figure of 38.9% due to the adverse impacts of higher markdowns and freight costs.

For 39 weeks ended Oct 29, 2022, BIG used net cash worth $279 million from operating activities. Capital expenditure for the quarter was $38 million. For 2022, the metric is likely to be $170 million compared with the prior mentioned $160 million.

On Sep 21, 2022, the company completed the refinancing and replacement of its $600-million senior unsecured credit facility with a new $900-million five-year revolving asset-based loan facility.

Also, management declared a quarterly dividend of 30 cents, payable Dec 28, 2022, to shareholders of record as of the close of business on Dec 14, 2022. The company did not repurchase any shares in the quarter. It has $159 million remaining under its existing $250-million authorization.

This Zacks Rank #3 (Hold) company opened 20 stores and shut down three stores in the quarter, bringing the total store count to 1,457 stores. It also revealed plans to sell 25 owned stores by the end of this year or early 2023. BIG expects to open more than 50 stores and close 50 or more stores, including the outright sale of 25 owned stores, in 2022.

Management expects the top-line performance to remain challenging. For the fiscal fourth quarter, it anticipates comps to decline in the low-double-digit range. Net new stores will contribute nearly 170 bps to growth compared with the fiscal 2021 reported figure.

Big Lots anticipates a sequential gross-margin improvement for the fourth quarter, resulting in a gross margin rate in the mid-30s. The gross margin is likely to be hurt by additional markdowns related to accelerated store closures and continued efforts to reduce inventory.

Wingstop currently sports a Zacks Rank #1 (Strong Buy). WING has a long-term earnings growth rate of 11%. Shares of WING have declined 9.2% in the past year. You can see the complete list of today’s Zacks #1 Rank stocks here.

The Zacks Consensus Estimate for Wingstop’s 2023 sales and EPS suggests growth of 18.1% and 16.4%, respectively, from the year-ago period’s reported levels.

The Zacks Consensus Estimate for Dollar General’s current financial-year revenues and EPS suggests growth of 10.8% and 13.8%, respectively, from the year-ago reported figures. DG has a trailing four-quarter earnings surprise of 2.2%, on average.

The Zacks Consensus Estimate for Chipotle Mexican Grill’s current financial-year revenues and EPS suggests growth of 15.2% and 30.8%, respectively, from the year-ago reported figures. CMG has a trailing four-quarter earnings surprise of 4.1%, on average.

Shell (SHEL) To Take Over Nature Energy In $2B Acquisition