Why AMSC Shares Slid Over 22% Yesterday 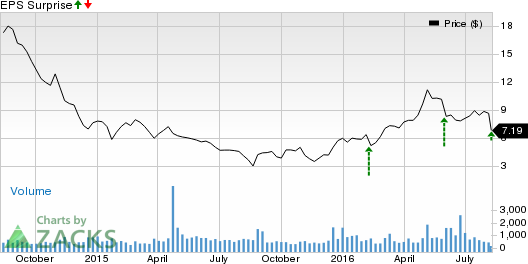 AMSC is one of those companies that derives a significant amount of revenue from a single customer/partner, which significantly increases execution risk. In 2015 for instance, the company generated 62% of revenue from India’s Inox Wind with other customers accounting for the balance. So it’s not surprising that when Inox had issues in the last quarter, the company’s Wind segment revenues dropped 68.8% from a 77% revenue share in the year-ago quarter to a 43% revenue share in the Jun 2016 quarter.

True, Inox is a major player in India’s wind energy sector, which according to the Global Wind Energy Council represented a total installed wind power capacity of 25 gigawatts (GW) at the end of calendar 2015.

CEO Daniel McGahn sounded quite optimistic in fact when he said, “India is a major player in the global wind energy market and ranks fourth in the world in cumulative installations according to industry analysts. The Indian government has announced an impressive target of having 60 gigawatts of wind energy capacity installed by 2022, which is more than double the existing installed capacity.”

But while the goals sound great and the central government will probably help the sector get there, it’s important to note that state governments also play a role. So when some states are lowering wind energy tariffs while also delaying payment to suppliers like Inox, this is a problem. If cash inflows from its customers stall or slow down, Inox will see operational challenges, which will in turn have a negative impact on its suppliers such as American Superconductor.

Inox licenses the wind turbine designs and buys the ECS from AMSC to supply wind project developers, so any weakness in demand or other hurdles will have a significant negative impact on the company’s results.

Other factors that can affect wind project developers, and therefore Inox are the consideration that the generation-based incentive of 0.75 per KWh will not be renewed by the government after the current period expires in Mar 2017 and that the maximum accelerated depreciation benefit for wind project developers will be reduced from 80% to 40% at the end of this period. This will increase book profits and therefore taxes for the companies.

While it’s possible that the incentives will come to an end soon, it is somewhat unlikely because of the government’s focus on clean energy.

At any rate, even if this does happen, AMSC and Inox have other plans. AMSC has now designed a more powerful system that can increase cost efficiencies for project developers. So even if lower incentives and higher taxes pressure their cash flows, the impact can be mitigated by greater cost efficiencies.

Net-net, management remains positive about the company’s prospects, although the second quarter won’t be exciting. And that’s fine because market research firm GlobalData estimates that companies continue to add wind generation capacity very rapidly (they added 52GW in 2014, 55GW in 2015 and are expected to add more than 56 GW in 2016). It would just be great if AMSC had lower customer concentration.

Should National Interstate (NATL) Stock Be in Your Portfolio?