The big news this week in the biotech sector was Pfizer’s announcement that it will acquire cancer-focused Medivation for $14 billion. This announcement has revived acquisition chatter in the sector with much speculation regarding which biotech company may be the next acquisition target.

1. Medivation finally agreed to be acquired with Pfizer shelling out $14 billion for the company. Medivation was a part of acquisition talks for quite a while with the company first receiving an offer from French drugmaker Sanofi. Last month, Medivation announced that it is open to acquisition talks and entered into confidentiality agreements with several firms that had expressed an interest in exploring a potential transaction. Since then, quite a few companies were rumored to be interested in acquiring Medivation.

2. Clovis , another cancer-focused company, got some good news with the FDA granting its lead pipeline candidate, rucaparib, priority review. With Clovis submitting its regulatory application for the experimental ovarian cancer treatment in June, a response from the FDA is expected by Feb 23, 2017. Investors cheered the development with shares increasing more than 27% on the news (Read more: Clovis Stock Up on FDA Priority Review for Rucaparib).

3. Regeneron (REGN - Free Report) is teaming up with the Biomedical Advanced Research and Development Authority (BARDA) of the U.S. Department of Health and Human Services (HHS) to manufacture and study two antibody therapies for the prevention and treatment of Middle East Respiratory Syndrome (MERS). At present, no medicines or vaccines are approved for the treatment or prevention of MERS, which causes severe respiratory tract infections and is associated with high death rates (Read more: Regeneron Stock Up on BARDA Deal for MERS Antibodies).

4. The European Commission expanded the label of Gilead’s (GILD - Free Report) HIV drug, Truvada (once-daily) making it the first antiretroviral medicine to be licensed in Europe for pre-exposure prophylaxis, in combination with safer-sex practices, to reduce the risk of sexually acquired HIV-1 in uninfected adults at high risk (Read more: Gilead Truvada Gets EU Approval for Label Expansion)

5. Portola’s shares were down on news that the company got a Complete Response Letter (CRL) from the FDA for AndexXa (andexanet alfa), an antidote for Factor Xa inhibitors when reversal of anticoagulation is needed due to life-threatening or uncontrolled bleeding. The agency has asked for more information related to manufacturing as well as additional data to support inclusion of edoxaban and enoxaparin in the label (Read more: Portola Stock Down on CRL for AndexXa BLA in U.S.).

The NASDAQ Biotechnology Index gained 1.9% over the last five trading days. While all major biotech stocks were up, Alexion was up 3.3%. Over the last six months, Biogen (BIIB - Free Report) was up 23.7% while Gilead (GILD - Free Report) lost 8.8% (See the last biotech stock roundup here: Vertex Slips on Study Halt, Aurinia Plunges on Lupus Data). 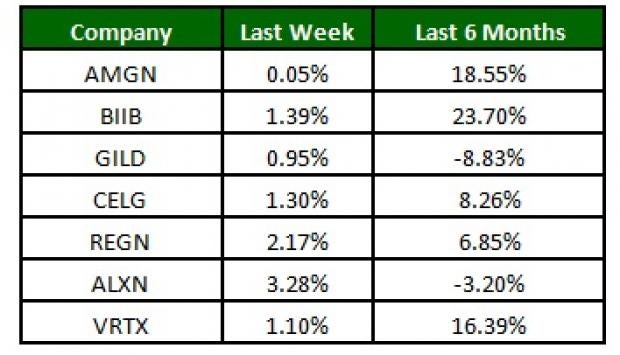 Watch out for the usual pipeline and regulatory updates from biotech companies.