Adjusted earnings (barring non-recurring items including merger-related expenses of roughly $3 million) came in at $1.37 per share in the fiscal fourth quarter, missing the Zacks Consensus Estimate of $1.49.

For fiscal 2016, the company recorded a profit of $353 million or $4.36 per share, down 12% year over year, hurt by restructuring and merger-related charges. Sales for the year fell 5% year over year to $4,190.6 million. Currency swings negatively impacted sales by 3% while acquisitions contributed 3%.

Revenues from the Paints segment slipped 7% year over year to $421 million in the reported quarter. Currency fluctuations unfavorably impacted sales by 1%. Volumes fell 7% in the quarter.

Valspar ended fiscal 2016 with cash and cash equivalents of around $174.7 million, down 6% year over year. Long-term debt decreased around 9% year over year to roughly $1,557 million.

Valspar and Sherwin-Williams SHW entered into a definitive merger agreement in Mar 2016. Per the deal, Sherwin-Williams will purchase Valspar for roughly $11.3 billion or $113 cash per share. The proposed merger has been approved by Valspar’s shareholders in Jun 2016 in a Special Meeting for shareholders and is likely to conclude by the first quarter of calendar year 2017, subject to customary closing conditions.

Valspar has underperformed the Zacks categorized Paints & Allied Products industry over the past three months. The company’s shares have declined around 3.1% over this period, compared with roughly 2.6% decline recorded by the industry. 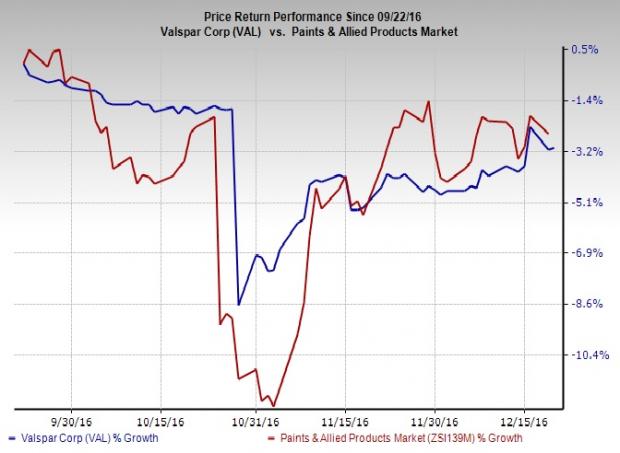 Chemours sports a Zacks Rank #1 (Strong Buy). The company has an expected earnings growth of around 60.1% for the current year. You can see the complete list of today’s Zacks #1 Rank stocks here.

Celanese carries a Zacks Rank #2 (Buy) and has an expected earnings growth of around 9.7% for the current year.