After adjusting for gain on sale of business (27 cents), ADP reported earnings 87 cents per share, which increased 20% from the year-ago quarter.

However, revenues of almost $2.99 billion missed the Zacks Consensus Estimate of $3.02 billion but grew 6.4% on a year-over-year basis.

Although ADP (22.9%) has outperformed the Zacks Outsourcing industry (19.9%) in the last one year, we believe that the revenue miss and revised down fiscal 2017 guidance will remain an overhang on the stock in the near term. 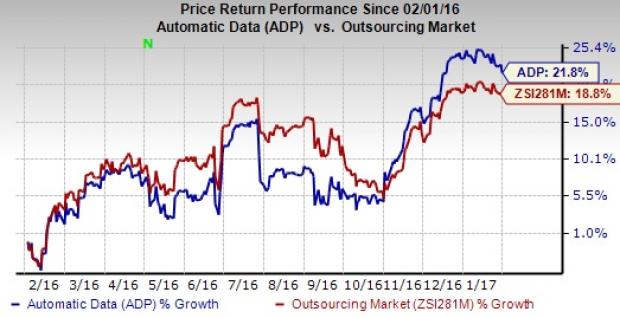 Employer Services revenues in the quarter increased 4% year over year to $2.31 billion at constant currency. The number of employees on ADP clients' payrolls in the U.S. increased 2.3% on a same-store-sales basis. Client revenue retention was up 10 basis points (bps) on a year-over-year basis.

Interest on funds held for clients in the quarter increased 3% to $92 million. The company’s average client funds balance inched up 2% year over year to $20.9 billion in the quarter while average interest yield of 1.8% remained flat on a year-over-year basis.

Cost of revenues as percentage of revenues declined 80 bps to 59.2%, primarily due to lower operating expenses (down 50 bps) as well as systems development & programming costs (down 20 bps). As a result, gross margin expanded by the same magnitude on a year-over-year basis to 40.8%.

ADP exited first-quarter 2017 with cash and cash equivalents (including short-term marketable securities) of approximately $2.71 billion compared with $2.82 billion as on Sep 30, 2016. Long-term debt was approximately $2 billion at the end of the quarter.

In Jan 2017, ADP acquired The Marcus Buckingham Company for total cash consideration of approximately $70 million and contingent consideration of up to $35 million payable over the next three years on fulfilment of certain conditions.

The company projects Employer Services revenues to grow in the range of 3–4%, down from earlier guidance of 4–5% in fiscal 2017. The company estimates pay per control to increase 2.5% in the year.

PEO Services revenues are expected to increase 13% down from earlier guidance range of 14–16% in the year.

Additionally, the company expects interest on funds held for clients to increase $15 million or about 4% as compared with earlier guidance of $5–$10 million, or approximately 2–3% over fiscal 2016 level.

It is based on estimated growth in average client funds balances of 3% from $22.4 billion in fiscal 2016.

Further, the total contribution from client funds extended investment strategy is anticipated to be up $10 million (up from $5 million).

Automatic Data Processing holds a dominant position in the payroll processing and human capital management market, primarily owing to its robust product portfolio. We believe that the company’s higher revenue per client and a decent customer retention ratio place it in an advantageous position.

However, we expect the company’s investments in its new initiatives to weigh on near-term earnings. Moreover, the divestiture of Consumer Health Spending Account (CHSA) and Consolidated Omnibus Reconciliation Act (COBRA) businesses will impact top-line growth in the rest of 2017.

In addition, increasing competition from the likes of Paychex, Equifax EFX, Insperity Inc. NSP and TriNet Group Inc. TNET is a major headwind.