Boeing Wins $1.3B Order for 5 Jets from Juneyao Airlines

Leading commercial aircraft maker The Boeing Company BA has received an order for five 787-9 Dreamliners from Juneyao Airlines, a major private carrier based in Shanghai, China.

Value of the airplanes at current list prices comes to nearly $1.32 billion. However, it goes without saying that the carrier will surely enjoy a substantial discount on this amount.

The order marks the airline's first order of Boeing’s planes and also the first wide-body airplane order. Juneyao Airlines also has options to buy five more 787-9s, as per the terms of agreement.

The Airlines’ Take on the Deal

According to Wang Junjin, Chairman of Juneyao Airlines, the latest order will play a vital role in growing the airlines’ business in the future as it aims to develop into an international airline. The airline is expected to offer premium service with an extended network, at the same time ensuring outstanding profitability.

At present, Juneyao Airlines operates domestic and short-haul international flights to countries like Japan, South Korea and Thailand. By 2020, the carrier intends to introduce new routes to North America, Europe as well as Australia.

Boeing’s 787-9 Dreamliner jet represents one of the latest models of the company’s family of super-efficient 787 jets, offering more seats and cargo capability than its previous versions. With the fuselage stretched by 6 meters (20 feet) over the 787-8 model, the 787-9 comes with 20% less fuel use and 20% fewer emissions than other aircraft of similar size.

In this context we would like to remind investors that, despite facing several issues from the very beginning of its inception, the 787 family of jets has remained one of the crucial centerpieces of Boeing’s commercial aircraft business line. Per the company’s fourth-quarter 2016 results, Boeing has made notable progress on the 787 program, including successfully transitioning to the 12 per month rate, increasing deliveries of the 787-9, reducing production flow times and lowering unit cost, while introducing the 787-10 into the production system.

Boeing is the largest aircraft manufacturer in the world in terms of revenues, orders and deliveries. It is also one of the largest aerospace contractors and has revenue exposure across more than 90 countries around the globe. Additionally, demand for Boeing’s commercial airplanes is on the rise owing to a steady improvement in passenger and freight traffic.

Impressively, 38% of the total commercial demand is likely to come from the Asian markets. In addition to the fact that China’s aviation industry has been witnessing a rapid evolution in recent times and is currently home to Asia’s largest business-jet fleet, this deal proves to be a boon for Boeing, which might motivate other airlines in Asia to purchase its aircraft.

Boeing’s 787 planes are one of the best-selling planes in the market, thanks primarily to its fuel efficiency and passenger comfort. To maintain its dominance in the commercial aerospace market, the company also continues to invest in research and development to upgrade and churn out the upgraded versions of its existing planes.

Hence, the company is expected to witness a heavy flow of orders for its planes from carriers around the world. This will likely drive its top line, going forward.

Boeing’s 2016 order details show that the company has booked 668 net commercial orders (accounting for cancellations), valued at $94 billion at current list prices. The figure includes 550 orders for the 737, followed by 58 orders for the 787. On the other hand, Airbus Group SE EADSY registered net bookings of 731 aircraft, thereby beating Boeing.

Since, Boeing and Airbus are the two largest players in the commercial aircraft space their direct rivalry is quite evident, which leads to intensifying competition in the industry. At the end of 2016, total commercial airline industry backlog was 12,589 aircraft, out of which Airbus’ share was 55% or 6,874 aircraft, while Boeing had a 45% share or 5,715 aircraft.

Shares of Boeing have increased 47.1% over the last 12 months, outperforming the Zacks categorized Aerospace–Defense industry’s gain of 30.1%. This could be because the company’s strong balance sheet and cash flows provide financial flexibility in matters of incremental dividend, ongoing share repurchases as well as earnings accretive acquisitions. The stock’s performance is in line with that of General Dynamics Corp. (GD - Free Report) and Huntington Ingalls Industries, Inc. HII, which also surpassed the industry mark. 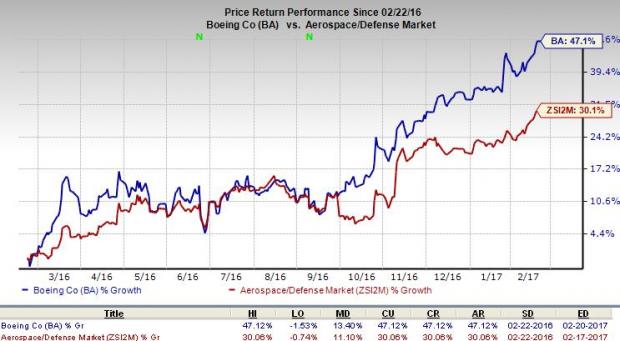