Low Volatility ETFs in Fine Fettle Despite a Bull Market

U.S. markets are continuously hitting fresh highs this month, but haven’t been able to wipe out the allure of low volatility ETFs from investors’ minds. These apparently safe products – which normally do not surge in a bull market but offer protection in troubled times – are still in fine fettle no matter how many highs the stocks have hit.

After such astounding gains, thoughts of a correction in the market or overvaluation concerns are quite justifiable. Note that the forward price-earnings (P/E) ratio for the S&P 500 companies now stands at around 17.6x – the highest since June 2004, higher than the 5-year and 10-year averages of 15x and 14x, respectively, as per the source.

Meanwhile, the Fed rate hike could be faster than expected this year given the decent economic growth momentum and a pickup in inflation following the stabilization in the oil patch. A fast withdrawal in cheap money flows can slow up the super-upbeat market movement (read: Yellen Gives Hawkish Signals: 5 ETF Plays).

Plus, this year, Europe will see a number of elections, which would determine the political steadiness in the global economy (read: Can Oil ETFs Rebound on Possibility of More OPEC Cuts?).

In fact, investors seem to have little faith in the recent rally as volume remains a little weak. For example, the S&P 500 added about 0.2% on February 24. But this rise was supported by weaker trading activity as about 2.2 billion shares exchanged hands on that day compared with the average of 3.6 billion shares.

In the chart below, we can also see that volumes of the S&P 500-based ETF SPY in February   were slightly subdued than earlier months when the fund was not performing that soundly. These muted volumes were seen when the S&P 500 hit record intraday highs 10 times in the first one month of Trump's presidency, added about 3.9% and crossed $20 trillion in market cap. 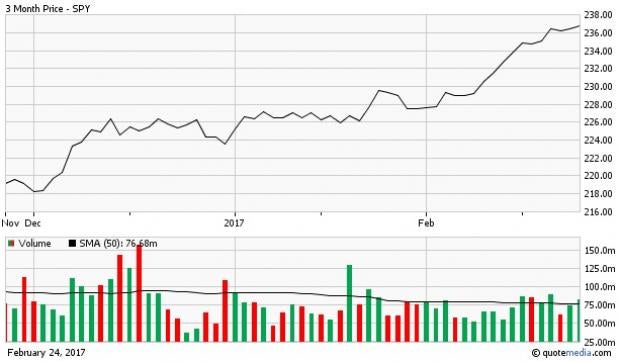 This means that some kind of desire for safe trading was associated with the recent rises in the broader market, keeping opportunities open for low-volatility ETFs during this period (read: Can Low Volatility ETFs Beat Bonds for Portfolio Stability?).

Reasons Why Low Volatility ETFs Were and Will Be in Vogue?

Several analysts including Goldman Sachs also voiced concerns about the bubbles in the market. Trump’s proposed policies about tax cuts and higher spending are not likely to materialize any time soon. Wage growth is still subdued and the Q4 U.S. GDP growth data came in lower than expected.

Plus, there are Trump’s debatable and protectionist policies over trade and immigration which may cause an upheaval in the market going forward. All these bred fears over the longevity of this rally. Many are worried about a bubble forming in the market due to the Trump bump.

As a result, investors have probably found it intriguing to seek resort to the low-volatility ETFs. Below we highlight a few of these that hit a 52-week high on February 24, 2017.

The fund may benefit investors who seek regular source of current income but are concerned about the volatility that can come from traditional equity income investments. The fund charges 30 bps. It has a Zacks Rank #3 (Hold) (read: 6 ETF Ideas Most Favored by Issuers in 2016).

This 184-fund measures the performance of equity securities in the top 85% by market capitalization of U.S. equity securities that have lower absolute volatility. The fund charges 15 bps in fees. It has a Zacks Rank #2.

The 100-stock fund is based on the S&P 500 Low Volatility Rate Response Index. The fund charges 25 bps in fees.