Post-election, the healthcare industry has been grappling with multiple issues, with the Obamacare saga dominating headlines. Meanwhile, Republicans have proposed a new draft legislation – The American Healthcare Act (AHA) – to replace Obamacare, also known as the Affordable Care Act (ACA).

The Republicans’ draft legislation, if enacted, will lead to a massive decline in the number of insured people. However, on the brighter side, this alternative paves way for radical changes like eliminating the ‘devastating’ 2.3% medical devices taxes, which were once mandated under Obamacare. To put it briefly, medical taxes were levied on ‘gross sales’ and not on profits of medical device companies.

Overall, Trump’s Obamacare replacement proposal is disappointing to a certain degree. According to Business Insider, several statistical reports estimate that around 6–10 million Americans will lose insurance coverage under the new healthcare act. Furthermore, recently the U.S. Congressional Budget Office and the staff of the Joint Committee on Taxation have projected that around 24 million people will be uninsured by 2026, if the new act, i.e. AHA is signed into law.

As the major insurance coverage expansion of Obamacare fades, the healthcare expenses of low-to-middle-class Americans will tend to shoot up as an immediate and direct effect. Thus, it would be difficult for the uninsured-customer base to opt for the expensive cutting-edge products and technology, denting the demand for unmet health care services. Undoubtedly, this poses a major threat in the demand cycles of cutting edge healthcare products.

To substantiate this, the latest data from Centers for Medicare & Medicaid Services suggests that the latest national health expenditure growth has decelerated from 5.8% in 2015 to 4.8% in 2016, thanks to the sentiments fuelled by consumer apprehensions “What if Obamacare goes away?”

Killing the Tax Woes: Who Will Gain?

"The tax code is a monstrosity and there’s only one thing to do with it. Scrap it, kill it, drive a stake through its heart, bury it and hope it never rises again to terrorize the American people." – Steve Forbes

One of the greatest boons of abolishing Obamacare will be the eradication of medical device taxes. Such high taxes forced companies to lay off employees, limit research and development activities and reduce capital investment. Furthermore, AdvaMed, a leading American medical device trade association, had referred the medical device tax as a ‘significant drag on medical innovation’. Notably, small device companies suffered the most.

Amid such worries, a repeal of the tax paradigm is expected to resume an aggressive pace of hiring and investment among the 9,000 U.S.-based medical device manufacturers, instilling investor confidence on the stocks.

The mixed sentiment prevailing in the medical device community has compelled the investment world to act bearish. Per Trump, the democrats had designed a “lousy healthcare” model. But how his complete renovation with a new set of streamlined rules will benefit the sector overall, is still unclear.

We believe stocks with strong fundamentals that also have a significant share of their business overseas may well brace themselves in this conundrum. They will make lucrative additions to your portfolio.

Zacks has designed the new Style Score System to compare each parameter of a stock with the peer group for an analysis of whether the stock is attractive from the value perspective.

We have zeroed in on three stocks that sport a Zacks Rank #1 (Strong Buy) or 2 (Buy) with Growth Style Score of ‘A.’ Our research shows that stocks with Growth Style Scores of ‘A’ or ‘B’ when combined with a Zacks Rank #1 or 2 offer the best investment opportunities in the growth investing space. Furthermore, stocks with special emphasis on international operations are taken into consideration.

Masimo Corporation MASI develops, manufactures and markets a family of non-invasive monitoring systems. Masimo’s top line has been leveraging on its international operations for long. In fact, the stock gained considerably in fiscal 2016, especially outside the U.S. as total international sales jumped nearly 12%, with Latin America and Asia showcasing solid growth.

Meanwhile, in the just-reported fourth quarter, the company witnessed growth of 20% to 40% in the international markets on a year-over-year basis. The stock has a Zacks Rank #2.

We note that this stock has a Growth score of ‘A’ and has added 43.1% year to date, much higher than the Zacks categorized Medical Instruments sub-industry’s increase of roughly 9.4%. 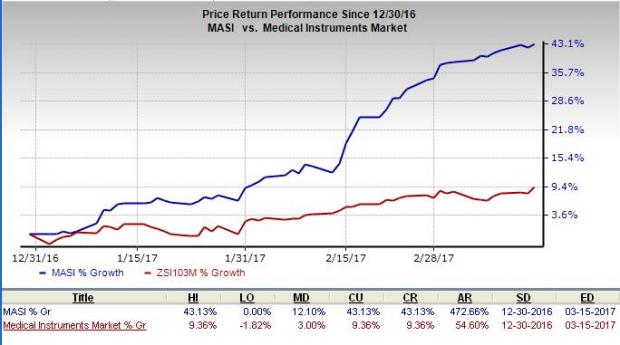 IDEXX Laboratories, Inc. (IDXX - Free Report) is a developer, manufacturer and distributer of products and services primarily for the companion animal veterinary, livestock and poultry, water testing and dairy markets. The stock sports a Zacks Rank #2. You can see the complete list of today’s Zacks #1 Rank (Strong Buy) stocks here.

IDEXX continues to demonstrate solid growth globally with strong international expansion. For full-year 2016, overall international revenues were 39% of total revenues, reflecting organic gains of 12% in 2016. Geographically, in the last reported fourth quarter, The company witnessed 10.8% rise in organic revenues in the international market on a year-over-year basis.

IDEXX has a Growth score ‘A’ and has gained 31% year to date. The company’s better-than-expected fourth-quarter 2016 performance has resulted in the encouraging price trend. 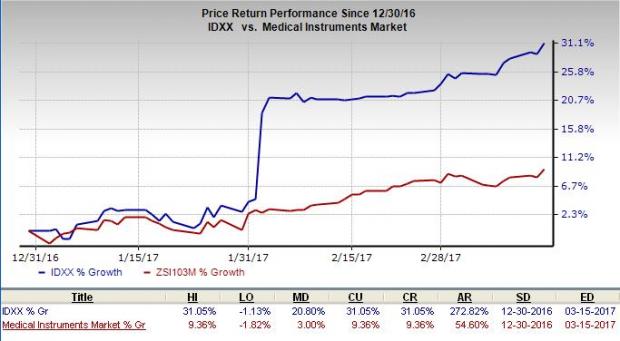 Inogen generates a significant portion of its revenues from international markets. In fiscal 2016, the company’s business-to-business international sales accounted for almost 25% of net revenues, increasing 41.8% on a year-over-year basis.

Inogen holds a Growth score of ‘A’ and has had an impressive run on the bourse year to date, representing a stellar return of 11.6%, way better than the broader industry. 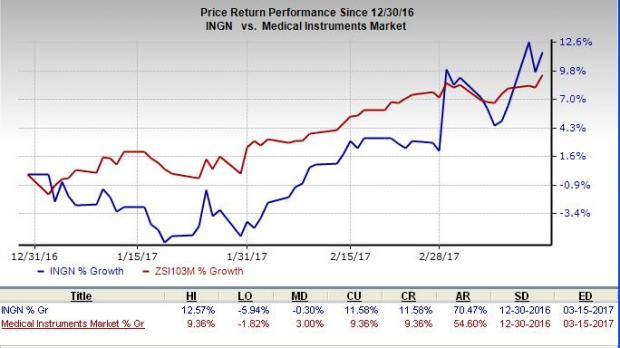 STERIS Continues to Trade Below Industry on Dull Outlook