There are rumors that Apple will make an official announcement at its annual Worldwide Developers Conference (WWDC) on Jun 5 in San Jose, CA.

If rumors are to be believed, Amazon and Apple have settled their ongoing differences over the “acceptable business terms” that Jeff Bezos had mentioned in a conference last summer, when he was asked why Amazon was not selling Apple TV.

Notably, Amazon stopped selling Apple TV boxes in 2015 citing the absence of Prime Video service on Apple TV that could have disappointed customers.

But now it appears that the two camps have decided to live in harmony as far as their video efforts are concerned. There are speculations that Amazon might resume selling Apple TV boxes.

Factors Leading to the Possible Settlement of Issues

Though the reasons behind the apparent reconciliation are not clear, it appears that Apple is now desperate to wipe off the biggest drag on sales of Apple TV.

As far as Amazon is concerned, it is always looking to diversify its offerings for Prime members. The company’s current focus is on building video content, primarily for Prime subscribers as the growth prospects in that market are considerable.

Coupled with this, the presence of Prime Video on Apple TV could get more people to Prime and generate increased sales for Amazon.

We note that year to date Amazon stock has underperformed the Zacks Internet Commerce industry over the last one year. Its share price has appreciated 27.4% compared with the industry’s gain of 31.4%. 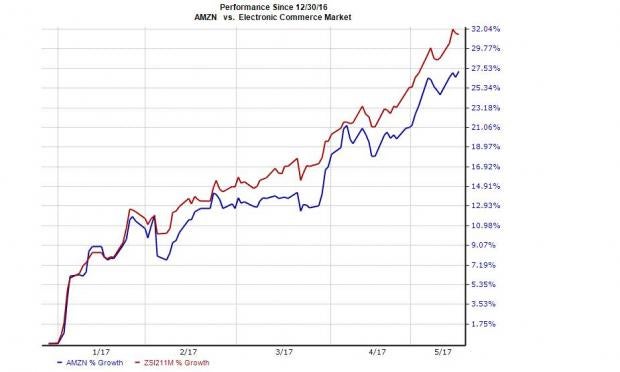 Despite this underperformance, we believe there are a lot of factors that could turn the wheel in favor of Amazon such as Prime expansion, its grocery initiatives and efforts around AWS. The company capitalizes largely on its execution strength, robust performance and technological prowess.

Long-term expected earnings per share growth rates for Marchex and Monolithic Power are 15% and 17%, respectively.

Just released, today's 220 Zacks Rank #5 Strong Sells demand urgent attention. If any are lurking in your portfolio or Watch List, they should be removed immediately. These are sinister companies because many appear to be sound investments. However, from 1988 through 2016, stocks from our Strong Sell list have actually performed 6X worse than the S&P 500.