Lockheed Martin Corp.’s (LMT - Free Report) Aeronautics business segment has secured a modification contract against a previously awarded order to procure verification simulation (VSim) for the F-35 Joint Strike Fighter. Work related to the deal is scheduled to be over by Apr 2018.

Valued at $50.8 million, the contract was awarded by the Naval Air Systems Command, Patuxent River, MD. Per the terms, Lockheed Martin will also aid in development and integration of F-35 in-a-box software models.

Majority of the work will be carried out in Fort Worth, TX. The contract will utilize fiscal 2017 research, development, test and evaluation (Navy, Marine Corps and Air Force) funds to finance the work.

The modification includes 50% of the purchases for the Air Force, 25% for Marine Corps and 25% for the Navy.

Lockheed Martin’s F-35 Lightning II is a single-seat, single-engine 5th Generation fighter aircraft, which comes with an advanced stealth feature combined with enhanced fighter speed and agility. It also has fully fused sensor information, network-enabled operations and advanced sustainment. Currently, three variants of F-35 are set to replace five fighter jets for the U.S. Air Force, Navy and Marine Corps. It will replace a variety of fighter jets for at least 10 other countries.

We remind investors that despite offering superior air security and stability, the F-35 program has been grappling with some engine-related technical issues for the last few years. The program has also been repeatedly criticized by President Trump for being an overtly expensive project. In this context, Lockheed Martin finally signed an $8.5 billion deal with Pentagon this February with the intent of delivering 90 F-35s of the 10th Lot at a historically low rate. This step was taken either due to Trump’s intervention or to keep management’s earlier promise to cut down cost by 6–7%.

To be specific, the 10th Lot represented a reduction of $728 million in costs compared with the 9th Lot’s production. Going ahead, Lockheed Martin's management will mostly adopt a saving initiative to lower sustainment costs for F-35 by 10% over the next couple of years. This, in turn, will result in cost savings of $1 billion over a five-year period.

Furthermore, the U.S. government expects to spend approximately $400 billion in the upcoming decades to develop and purchase 2,443 F-35 jets. With Lockheed Martin trying its best to effectively reduce the price of this program, the government may place larger orders in the days ahead.  We believe the aforementioned developments will further strengthen that possibility. This, in turn, will boost the company’s profits and the recent modification is an inevitable example of that.

Lockheed Martin’s stock was up about 12.9% in the last one year, underperforming the Zacks categorized Aerospace/Defense industry’s gain of 26.7%. This could be because the earlier budget cuts have put pressure on the top line, although the present defense budget is more in favor of the sector. We believe that budget deficits and political uncertainty might make future defense budgets vulnerable to cutbacks. 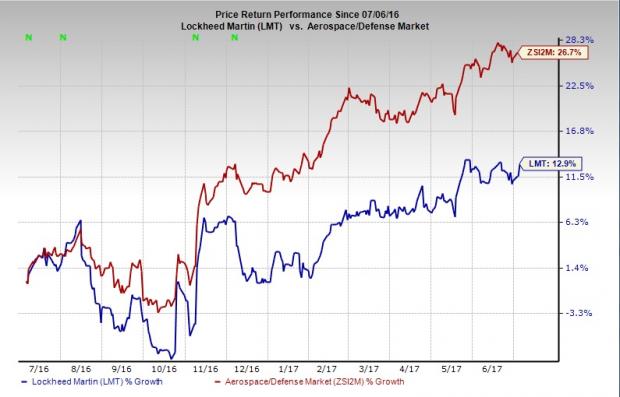 In Search of Earnings Beat? Play These 5 Stocks