Net sales for the quarter were $680.8 million, up 11.6% year over year. The figure surpassed the Zacks Consensus Estimate of $655 million. Revenues rose across all segments except Energy & Mining.

Broadly, the Omaha, NE-based company classifies its business segments as infrastructure- and agriculture-related.

Engineered Support Structures: The segment’s sales of $221.5 million for the reported quarter were 9% higher than the prior-year quarter, courtesy of increased highway safety sales in Australia where road development activity improved. Lighting sales fell in North America while it increased in Europe owing to stable market conditions.

Utility Support Structures: Sales rose 19% year over year to $179.8 million owing to increased pricing as a result of higher steel costs. The ongoing expansion of the North American grid to improve its reliability and capacity also provided an impetus.

Coatings: This segment recorded net sales growth of 18% year over year to $82.6 million. In the Asia-Pacific region, the growth of sales can be attributed to improved volume and pricing owing to the market recovery. Sales in North America improved due to increased pricing and strong domestic demand.

Energy and Mining:  Net sales slightly fell to $79.8 million from the prior year quarter as increase in sales of access systems were offset by declines in mining consumables and offshore construction.

Irrigation: The segment reported net sales of $147.4 million, up 15% year over year driven by broad-based demand in international markets. Sales in the North American were modestly higher.

Valmont now expects earnings for 2017 to be in the range of $6.90-$7.04 per share factoring in the impact of hurricanes. Favorable Utility Support and Engineered Support Structures sales are expected to drive revenues in the fourth quarter.

Valmont’s shares have gained around 6.3% over the last six months as against the industry’s 10.2% decline. 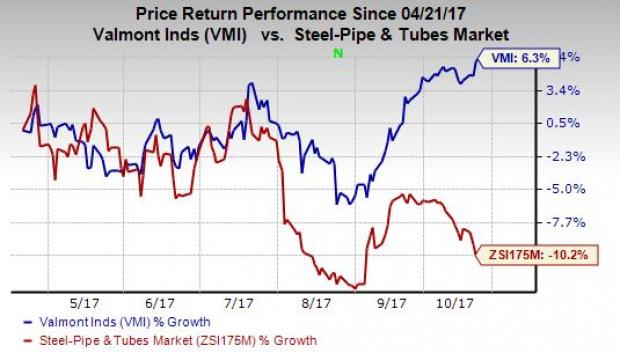 Hitachi Construction has an expected long-term earnings growth rate of 16.2%.

Komatsu has an expected earnings growth of 16.2% for the current year.