While reports about tech giant Amazon meeting generic drugmakers made the rounds, companies like Pfizer (PFE - Free Report) and Teva Pharmaceutical Industries Ltd.’s (TEVA - Free Report) were in the news with the former reporting late-stage data and the latter announcing leadership and organizational changes.

Is Amazon in Talks with Generic Drugmakers? According to a CNBC report, tech giant Amazon is in preliminary discussions with generic drugmakers including Mylan (MYL - Free Report) and Novartis’s generic arm, Sandoz, about entering the pharmacy market. With not much information being available, there is a lot of speculation and discussion among industry watchers about the way the tech giant is planning to enter the market – as a drug wholesaler or a retailer.

Pfizer, Merck KGaA’s Bavencio Fails in Late-Stage Study: Pfizer and Merck KGaA suffered a setback in their efforts to expand the label of their checkpoint inhibitor, Bavencio (avelumab) with the therapy failing to meet the primary endpoint of superior overall survival (“OS”) compared with physician's choice of chemotherapy. The late-stage study was being conducted to evaluate Bavencio for the third-line treatment of unresectable, recurrent or metastatic gastric or gastroesophageal junction (“GEJ”) adenocarcinoma patients whose disease progressed following two prior therapeutic regimens, regardless of PD-L1 expression.

The companies continue to evaluate Bavencio in the first-line switch maintenance setting for gastric cancer. According to information provided by the companies, gastric cancer is the fifth most common cancer in the world and the third most common cause of cancer death. With survival in advanced disease being poor and usually less than a year, the third-line setting is a difficult-to-treat population (Read more: Pfizer/Merck KGaA's Bavencio Fails in Gastric Cancer Study).

Leadership & Organizational Changes at Teva: Teva’s new CEO has announced changes in the organization as well as leadership structure of the company. A key change is that the generics and specialty medicines segments will now operate as a single segment across three regions – North America, Europe and Growth Markets. The Generic R&D and Specialty R&D organizations will also be merged into one global group while a newly formed Marketing & Portfolio function will be set up. With these changes, Dr. Michael Hayden, Dr. Rob Koremans and Dipankar Bhattacharjee will be exiting Teva effective Dec 31, 2017. Several new appointments were also announced while a detailed restructuring plan will be unveiled in mid-December.

Teva has many challenges ahead – paying down debt, divesting non-core businesses to increase focus on core areas and generate cash, delivering on the pipeline and getting the U.S. generics business back on track. Generic competition for Copaxone 40mg is another major setback for the stock.

Teva has lost 59.1% of its value year to date versus the 29.2% decline recorded by its industry.

Mylan’s Biosimilars under EU Review: Mylan and partner Biocon said that the European Medicines Agency (“EMA”) has accepted their marketing applications for biosimilar versions of Roche’s Herceptin (trastuzumab) and Amgen’s Neulasta (pegfilgrastim). While Herceptin is used for the treatment of certain HER2-positive breast and gastric cancers, Neulasta is used for the reduction of the duration of neutropenia (low count of neutrophils, a type of white blood cells) and the incidence of fever associated with neutropenia in adult patients treated with chemotherapy in certain types of cancer.

Both marketing applications had been withdrawn earlier following an audit that was conducted by the European inspecting authority of Biocon's drug product facility. Biocon said that it has completed the Corrective and Preventive Actions (CAPAs) based on the audit – these will be verified during inspection as part of the regulatory review process.

Meanwhile, the companies should get a response from the FDA for their regulatory application for their biosimilar version of Herceptin by December 3. Earlier this year in July, the FDA’s Oncologic Drugs Advisory Committee (“ODAC”) had voted in favor of approving the biosimilar. Although the FDA is not required to do so, it usually follows the recommendations of its advisory panels.

J&J and Partners Commence HIV Vaccine Efficacy Study: With focus on World AIDS Day today, Johnson & Johnson (JNJ - Free Report) along with The Bill & Melinda Gates Foundation and National Institutes of Health has initiated the first efficacy study for an investigational mosaic HIV-1 preventive vaccine. The study will evaluate the vaccine’s efficacy and safety in reducing the incidence of HIV infection in 2,600 women in sub-Saharan Africa. There is significant unmet need for a vaccine for HIV – although a lot of progress has been made in treating and managing the disease, almost two million people become infected every year. Developing a vaccine for HIV has proved to be challenging due to the unique properties of the virus including its ability to mutate rapidly. Moreover, genetic diversity with multiple strains and subtypes prevalent in different parts of the world are additional hurdles.

We note that another efficacy study evaluating a different vaccine candidate is being conducted in South Africa. 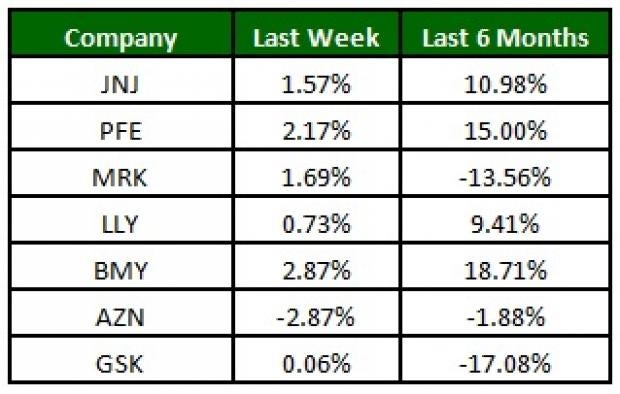 Watch out for regulatory and pipeline news from pharma stocks. A response from the FDA regarding the approval status of Mylan and Biocon’s biosimilar version of Roche’s blockbuster cancer drug, Herceptin (trastuzumab) should be out on December 3. Novo Nordisk (NVO - Free Report) , a key player in the diabetes market, should also get to know the approval status of its latest type II diabetes product offering, semaglutide, this month.

4 Reasons to Add Bank of Commerce (BOCH) to Your Portfolio