Ameren Corporation (AEE - Free Report) subsidiary — Ameren Transmission Company of Illinois (“ATXI”) — recently received approval from the Missouri Public Service Commission (MoPSC) to proceed with the construction of the Mark Twain Transmission Project. The approval followed ATXI’s receipt of the certificate of convenience and necessity (CCN) from the MoPSC.

Details of the Project

The transmission project is a 100-mile, 345,000-volt transmission line and substation, which will run from Palmyra to Kirksville in Missouri and north to the Iowa border. Per Ameren management, once completed, this project will accomplish a critical link in the region's energy infrastructure. The project is also expected to deliver greater energy reliability, economic growth and better access to clean energy sources to the residents of Missouri.

The route will run through the Adair, Knox, Lewis, Marion and Schuyler counties of Missouri and will include the construction of the Zachary Substation adjacent to the Adair Substation in Adair. The route will co-locate on Northeast Missouri Electric Power Cooperative’s 161,000-volt line between Palmyra and Kirksville and Ameren Missouri's 161,000-volt line from Kirksville to the Iowa border.

Construction of the project, worth $250 million, is expected to begin in April 2018 with a targeted in-service date of December 2019. The company plans to work with Northeast Power, landowners, county commissioners and various local and state agencies on the project.

About the Mark Twain Project

The Mark Twain project is a MISO-approved transmission line to be built in Northeast Missouri. In the third quarter of 2017, ATXI finalized an alternative project route and reached agreements with a cooperative electric company in Northeast Missouri and Ameren Missouri to locate nearly the entire Mark Twain project on existing transmission line corridors. It also received consent for road crossings from five affected counties in Northeast Missouri. In September 2017, ATXI filed for the certificate of CCN with the MoPSC and anticipated a decision from the MoPSC in the first half of 2018. The recent approval was in line with the company’s expectation.

Ameren follows a systematic investment strategy, primarily for growth projects and infrastructure upgrades. This strategy has helped the company provide reliable services and maintain a dependable and safe transmission system which will help meet rising demand.

The company’s current long-term capital-expenditure plan worth $11.2 billion comprises up to $0.6 billion of investment in ATXI. These investments will support its overall system reliability, environmental compliance and electric and natural gas utility infrastructure improvements.

Missouri, being the national transportation hub for rail, river, road, and air shipments in the United States, has energy consumption per capita at the national median. Naturally, energy demand is high in the state that offers solid opportunities to companies like Ameren.

Toward this end, the Mark Twain project approval will help the company deliver more reliable electricity in various regions of the state as well as cost-effective energy savings beyond new efficiency standards. This in turn will attract more customers, subsequently allowing Ameren to expand its revenue margin.

Ameren’s stock has moved up about 8.1% in a year, compared with the broader industry’s gain of 2.6%. The modernized approach and focus on increasing customer reliability might have led to the outperformance. 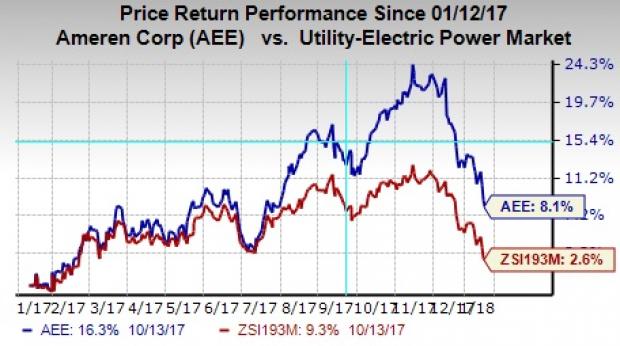 Pampa Energia posted an average positive earnings surprise of 585.71% over the last four quarters. The Zacks Consensus Estimate for 2018 earnings moved up 62 cents over the past 60 days.

Atlantic Power posted an average positive earnings surprise of 29.21% in the past four quarters. The Zacks Consensus Estimate for loss narrowed by 10 cents for 2018 over the last 90 days.

DTE Energy has an average positive earnings surprise of 3.81% for the last four quarters. The Zacks Consensus Estimate for 2018 earnings has risen by 5 cents in the last 90 days.