The Dow rebounded strongly over the first five trading days after entering correction territory last week. The index gained on Monday after investors looked to buy on the cheap, with energy stocks among the key gainers. The Dow continued to gain over Tuesday and Wednesday despite initial concerns about a higher-than-expected consumer prices data. Ultimately, the Dow gained for the fifth consecutive day on Thursday, on track to post its biggest weekly increase since November 2016.

The Dow increased 1.4% last Friday despite a tumultuous week. The fear-gauge CBOE Volatility Index (VIX) decreased 13.2% to close at 29.06. However, it remained three times higher than last year’s average. All the key U.S. indexes made a recovery during the last hour of trading to end in positive territory. The movement lacked specific catalysts even as the blue-chip index registered an increase of more than 300 points

During last week, markets slipped into correction territory, with the Dow witnessing two 1,000-point drops during the period, losing 5.2% in the process. Markets suffered huge losses during the week following concerns that bonds were becoming more attractive investments than equities.

Rising bond yields diminished the appeal of stocks, especially with valuations hovering at historically high levels. A tighter labor market, strong wage growth and prospects of rise in inflation raised rate hike prospects as early as Fed’s next policy meeting in March, which in turn weighed on investor sentiment. A higher rate environment and optimism of steady economic growth and higher inflation weighed on bond prices.

The Dow This Week

The index increased 1.7% on Monday. The movement came after investors looked to buy on the cheap, with energy stocks among the key gainers. Domestic oil prices recovered after last-week’s decline after OPEC in its monthly report projected global oil demand would increase by 1.59 million barrels per day (bpd) this year, better than its previous outlook by 60,000 bpd.

Additionally, President Trump signed into law a bipartisan budget deal that will provide a massive spending boost to the Pentagon and U.S. infrastructure. This in turn had a positive impact on the key indexes.

The index gained for the third consecutive day on Tuesday, adding 0.2%.  Despite registering gains on Tuesday, the Dow remained 7% below the all-time high level registered on Jan 26.

Additionally, trading volumes during the day were comparatively lower as investors waited for Bureau of Labor Statistics’ consumer prices report on Wednesday for further clues on inflation.

The index increased 1% on Wednesday registering its longest stretch of gains in more than five weeks. Markets managed to rebound after declining initially following a better-than-expected consumer prices report, a key inflation metric. A strong earnings season and a steady economy helped all the three key indexes to shrug off their yearly declines to close in positive territory.

The index increased 1.2% on Thursday, ending in positive territory on for the fifth straight trading day. This was the Dow’s best such feat since December 2011. The index is now up 4% for the year and is on the way to post its biggest weekly increase since November 2016. Although, the movement lacked specific catalysts, part of the day’s gains were fueled by strong earnings and a resilient U.S. economy.

For third-quarter fiscal 2018, revenues are expected to rise 3-5% on a year-over-year basis. Non-GAAP earnings are anticipated between 64 cents and 66 cents per share. The Zacks Consensus Estimate for earnings is pegged at 62 cents, while that for revenues is at $12.18 billion.

Non-GAAP gross margin is expected in the range of 63-64%, while operating margin is anticipated between 29.5% and 30.5% for the quarter. (Read: Cisco Q2 Earnings Top Estimates, Up Y/Y, View Strong)

Caterpillar Inc. CAT reported a rise of 34% in global retail sales for the three months ended January 2018, at par with the performance witnessed in December 2017 and at levels last seen in August 2011. This was driven by improvement across all regions. Within Machines, Resource Industries and Construction Industries reported positive gains for the seventh and 12th consecutive months, respectively.

In January, Zacks Rank #2 (Buy) Caterpillar’s performance was driven by a 51% increase in Asia Pacific sales. The region has been a consistent contributor for the company since it posted the first positive reading in August 2016. Latin America registered growth of 49% in October and Europe, Africa and Middle East (“EAME”) sales were up 31%. North America sales also went up 23%. (Read: Caterpillar January Sales up 34%: Will the Momentum Sustain?)

Visa Inc. V recently announced that it has entered into a definitive agreement to acquire Fraedom, which has been in a partnership with Visa for about 10 years. The transaction is subject to the customary closing conditions and is expected to be completed in the first half of 2018.

The FDA decision comes much earlier than expected. Please note that in December last year, the NDA was granted priority review by the FDA. With the FDA granting priority review, a response was expected in April 2018. Erleada’s NDA submission was based on positive data from the phase III SPARTAN study.

Last week, J&J presented positive data from the SPARTAN study at the American Society of Clinical Oncology Genitourinary Cancers Symposium meeting. The data from the study showed that Erleada (apalutamide) significantly reduced the risk of metastatis or death by 72% and increased median metastatis-free survival by more than two years in patients with nmCRPC. (Read: J&J Gets FDA Nod for New Prostate Cancer Treatment (Revised))

The Goldman Sachs Group GS is in talks to acquire a New York-based startup, Clarity Money, per an article by Bloomberg. The bank plans to fuse the personal finance services that the startup offers with its digital consumer lending platform — Marcus by Goldman Sachs. Goldman Sachs has a Zacks Rank #3.

People familiar with the matter disclosed that no deal had been finalized so far. Also, there are possibilities of the deal coming to nothing. Launched in October 2016, Marcus by Goldman Sachs, has been delivering good results so far. The platform exceeded the bank’s expectation of lending about $2 billion in loans by year-end 2017. (Read: Goldman to Expand Online Lending Platform's Offerings)

In 2017, the company added 2.7 billion barrels of oil equivalent (BOE) to its reserves, which marks 183% production replacement. It brings the company's total proved reserves to 21.2 billion BOE.

ExxonMobil believes that the proved reserves hold significant development opportunities, which can grow shareholder value in the coming years. Of the total proved reserves, 57% was liquids, which increased by 4% from 53% in 2016. At the current production rate of the company, its reserves are expected to last for 14 years. (Read: ExxonMobil Announces 2017 Proved Reserve Growth of 19%) 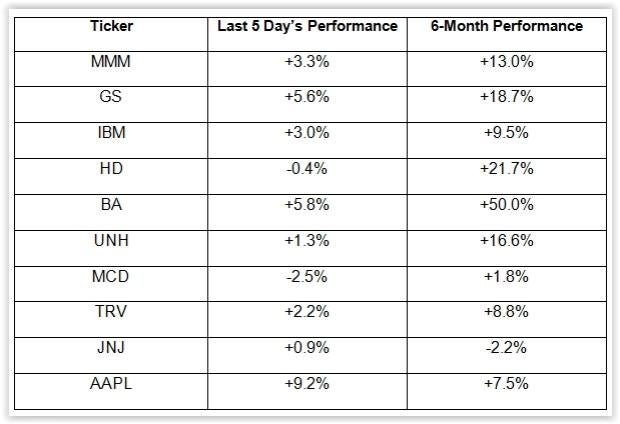 Markets seem to have rebounded strongly from the grave losses suffered last week. Investors have overcome their initial jitters and have pushed up indexes via their willingness to big up great bargains on the cheap. As a result, benchmarks are back in positive territory and are coasting toward their best weekly gains in a while. Given that traders have chosen to focus on broad fundamentals, namely a strong economy and excellent earnings results, markets are likely to continue with their recovery in the week ahead.