This pioneering service is intended to bring an affordable Wi-Fi experience directly to consumer's devices with minimal local infrastructure investment. This reflects Viasat's ability to quickly bring cost-effective Internet service to emerging markets, where there is a wide gap between the demand, affordability and availability.

Since April 2016, the company has been conducting “Community Wi-Fi” trials at roughly 500 sites across Northern Mexico, using its existing satellites and Wi-Fi technologies.

As of today, these successful deployments cover hundreds of thousands of Mexicans, who did not have access to Internet services. In addition, the company expects to bridge the global digital divide by reaching millions of people in unconnected towns in Mexico, with an increase in ViaSat-2 satellite capacity and coverage.

This in-house expertise allows Viasat to affordably extend and manage the value and convenience of satellite communications over Wi-Fi hotspots. It expects to cater to the growing number of subscribers, from emerging residential markets to enterprises and commercial aviation.

The company aims to deliver a high-quality Internet experience at an affordable end-user price to millions of unconnected people living in developed as well as emerging markets by leveraging the ViaSat-2 satellite system's low-cost capacity and higher speeds coupled with Wi-Fi service expertise. Viasat, in partnership with Grupo Prosperist, a local telecommunications and technology service provider, has launched its commercial service in Mexico.

Such a bold move exemplifies Viasat’s capacity to scale up and monetize its services and capacity globally, while giving people living in underserved and virtually unserved markets new opportunities to be part of the digital community.

Over the last six months, shares of Viasat have underperformed the industry with an average loss of 2.1% against growth of 2.5% for the latter. 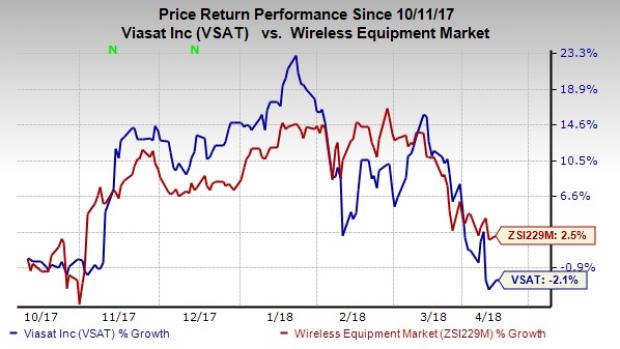 Comtech Telecommunications has an expected long-term earnings growth rate of 5%. It exceeded earnings estimates in each of the trailing four quarters, with an average of 111.4%.

BlackBerry has an expected long-term earnings growth rate of 18.6%. It exceeded earnings estimates twice in the trailing four quarters, with an average of 500%.

Orange has an expected long-term earnings growth rate of 25.9%.