Can Core Business Focus Aid BCE to Achieve a Turnaround?

The introduction of price cap rules by the Canadian regulators have limited rate increases and reduced the amount that incumbent carriers can charge from competitors for accessing the former’s network. As BCE attempts to offset inter-carrier price caps by raising fees of its own end-users, the market dynamics and dictating elasticity have reduced overall demand as customers tend to switch to lower-priced carriers.

Successful implementation of BCE’s six core goals is the most critical factor in determining its future profitability. The execution requires enhanced employee skills, more capital investment and targeted cost reductions. Failure in any of these mars company’s financials and growth prospects, leading to lower revenues and profitability. Over the last three months, shares of BCE have underperformed the industry with an average loss of 8.1% compared with a decline of 5.2% for the latter. 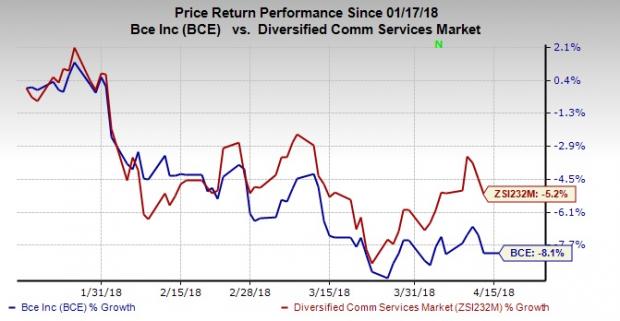 With rapid growth in video and other bandwidth-intensive applications, BCE has to invest substantially in LTE, broadband and fiber, in order to provide additional capacity on Internet and wireless networks. The company remains susceptible to risks of non-recovery of costs due to competitors’ short-term pricing of comparable services. Also, intense price competition is forcing prospective and existing customers to opt for discounted monthly rate plans offered by competitors.

Approximately 45% of the company’s employees are represented by unions and are covered by collective bargaining agreements. Renegotiating these agreements often result in higher labor costs and work disruptions, including work stoppages or work slowdown.

Moreover, the Canadian telephone operator’s local line access for traditional telephony service continues to face a decline among large customers due to higher wireless substitution and migration to IP-based services.

On the wireline front, BCE expects financial results to improve in 2018 and beyond as it gains from an increase in net revenue generation units. The EBITDA growth trend in the segment is also expected to continue. Further, it continues to leverage on FibeTV and FibreOP TV growth and an improved business market, backed by a steady economy.

Whether such core business focus could help BCE to revive its sagging shares in the long term remains to be seen.

Ameresco has an expected long-term earnings growth rate of 15.5%. It exceeded earnings estimates thrice in the trailing four quarters, with an average of 12.1%.

Nippon has an expected long-term earnings growth rate of 7.8%.

China Telecom has an expected long-term earnings growth rate of 7.9%.