The Cato Corporation CATO reverted to the trend of reporting declining comparable-store sales (comps) with a 6% fall in April. The company posted sales of $71.8 million for the four-week period ending May 5, 2018, which dropped 11% from $80.5 million recorded in the prior-year period.

Further, the fashion apparel and accessories’ retailer reported sales of $236 million for the first quarter of fiscal 2018, down 1% from the prior-year period. Quarterly comps also slipped 1% year over year.

Management stated that sales for April decreased due to the shift of Easter from April to March in 2018, unlike the previous year. As a result, management combined sales for both months in order to analyze the performance better than last year. Notably, sales for the combined period were down 3%, while comps for the nine-week period ended May 5, 2018 inched up 1%. Further, the company has been witnessing favorable sales trends after the first quarter, which is expected to persist in second-quarter fiscal 2018.

Retail sector has long been bearing the brunt of changing consumer preferences from offline shopping to online along with lower store traffic and volatile consumer spending. Consequently, retailers are now focusing more on enhancing their omni-channel capabilities, optimizing store fleet and restructuring activities to counter such headwinds. Also, they are resorting to store closures to concentrate more on digital spaces with smart phones becoming the primary avenue for making purchases.

The above concerns and disappointing comps trend have deeply hurt investors’ sentiments. Shares of the company have plunged 28.4% in a year against the industry’s gain of 0.2%. 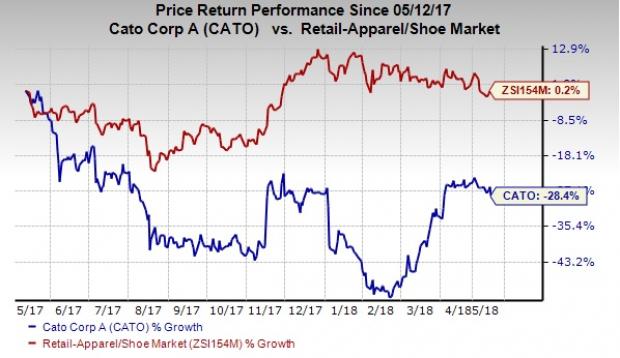