On May 21, we issued an updated research report on CenturyLink, Inc. .

The network provider is currently focusing on sales force integration and driving profitable revenue growth while improving customer experience. Such consistent integration efforts will lead to synergies and help the company move toward sustainable improved profitability and cash flow generation.

The acquisition of Level 3 Communications has increased CenturyLink's network by 200,000 route miles of fiber including 64,000 route miles in 350 metropolitan areas and 33,000 subsea route miles connecting multiple continents. The company’s on-net buildings are expected to increase about 75% to approximately 75,000, including 10,000 buildings in Europe, the Middle East and Africa and Latin America.

The company continues to focus on accelerating its operational efficiencies through a number of methods like network simplification and rationalization. It also aims to establish itself as a global leader in cloud infrastructure. CenturyLink has hosted IT solutions arena designed for enterprise customers.

CenturyLink’s strong network capabilities, integrated hosting and network solutions are likely to promote growth in the cloud business. Notably, the company sees its managed and cloud services as a key differentiator from other players in the market, which should boost its top line.

The company is investing in fiber-to-the-tower expansion and has expanded its fiber-based backhaul services. It expects its Managed Office and Managed Enterprise Solutions to continue gaining traction and drive revenue growth on the back of increasing demands from small and large business customers.

Further, CenturyLink’s broadband expansion goal will help it gain from the growing demand. The company has managed to enhance broadband speed with its continuous investments in network development.

Over the past three months, the stock has significantly outperformed the industry with an average return of 7.3% against a decline of 5% for the latter. Management believes that the company has ample business growth opportunities, which will help to drive long-term shareholder value. 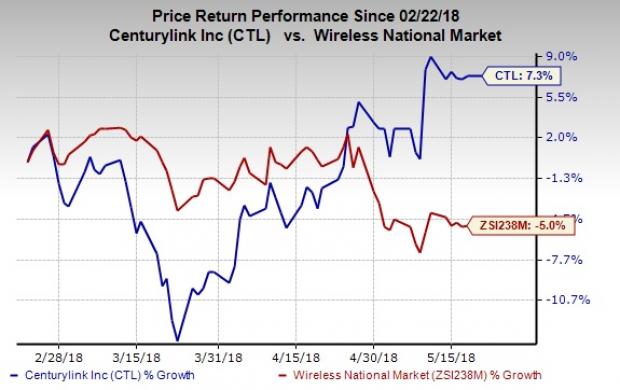 Nevertheless, we remain impressed with the inherent growth potential of this Zacks Rank #3 (Hold) stock.

BlackBerry has a healthy long-term earnings growth expectation of 18.6%. It topped earnings estimates twice in the trailing four quarters, with an average beat of 500%.

TIM has a solid long-term earnings growth expectation of 26.2%. It topped earnings estimates twice in the trailing four quarters, with an average beat of 25.5%.

SMC has a long-term earnings growth expectation of 13.7%.