However, shares of the company lost nearly 4.7% in after-hours trading on Aug 30. Decelerated comparable sales (comps) growth in the reported quarter and third-quarter earnings guidance, which fell shy of analysts’ expectations, hurt the stock. In the past month, this Zacks Rank #4 (Sell) stock has gained 2.7% while the industry rallied 6.9%. 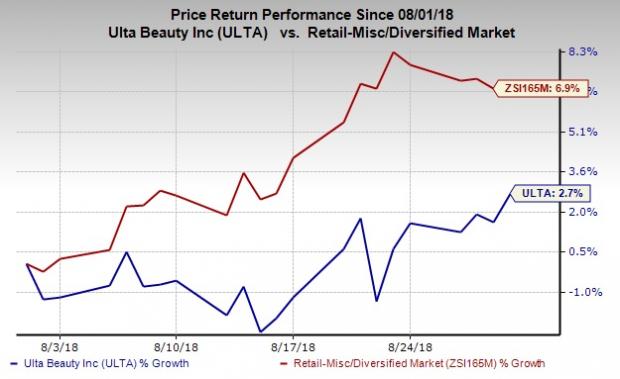 Ulta Beauty’s adjusted earnings came in at $2.46 per share, which exceeded the Zacks Consensus Estimate of $2.40. The bottom line also surged 34.4% year over year.

Net revenues of this cosmetics retailer grew 15.4% year over year to $1,488.2 million but marginally came below the Zacks Consensus Estimate of $1,490 million. We note that Ulta Beauty adopted Accounting Standards Codification (ASC) Topic 606, Revenue from Contracts with Customers on Feb 4, 2018. Including the effect from adoption of this new revenue standard, the company’s top line grew by $9.4 million in the reported quarter.

Comps (including stores and e-commerce) climbed 6.5% compared with 11.7% growth in the prior-year quarter. Increase in traffic and ticket along with stupendous e-commerce improvement led to comps growth. During the fiscal second quarter, the company registered transaction growth of 3.1% while average ticket was up 3.4%.

Gross profit improved 14.1% year over year to $535.5 million. However, gross profit margin fell 40 bps to 36% due to the category and channel mix shifts along with investments in the salon services and supply chain activities. The metric was partly offset by the effect from new revenue recognition accounting. Including the effect from the adoption of the revenue standard, gross margin expanded 60 bps.

While operating income was up 7.8% year over year to $193.8 million, operating margin declined 100 bps to 13%. The contraction in operating margin was due to a rise of 70 bps in SG&A expenses (as a percentage of sales), somewhat mitigated with lower pre-opening expenses, which decreased 26.2% to $4.5 million.

Ulta Beauty ended the quarter with cash and cash equivalents of $237.1 million, short-term investments of $149 million and shareholders’ equity of $1,812.5 million. Merchandise inventories summed $1,219.7 million as of Aug 4, 2018, marking an increase of 6.6% from the year-ago period. However, average inventory per store dipped 4.3%.

Net cash provided by operating activities came in at roughly $388 million in the first half of fiscal 2018.

In the fiscal second quarter, Ulta Beauty opened 19 stores while shuttered two. As of Aug 4, 2018, the company operated 1,124 stores while increasing its total square footage by 11.2% year over year.

Moving ahead, the company still plans to open 100 stores and remodel or relocate 15 outlets in fiscal 2018.

Following the mixed quarterly results, management updated guidance for third-quarter and reiterated view for fiscal 2018. For the fiscal third quarter, the company anticipates net sales in the $1,550-$1,563 million band, up from 1,342.2 million registered in the prior-year quarter. Comps including e-commerce sales are predicted to grow 7-8% compared with a 10.3% rise in third-quarter fiscal 2017.

Earnings per share for the impending quarter are envisioned in the range of $2.11-$2.16 compared with $1.70 in the comparable quarter, last fiscal. The Zacks Consensus Estimate for third-quarter earnings per share stands higher at $2.30, which is likely to witness downward revisions.

For fiscal 2018, the company still expects total sales to grow in low teens’ percentage with comps growth in the range of 6-8%. Further, the company continues anticipating e-commerce sales growth in the 40% range. However, operating margin is still projected to decline in the band of 50-70 bps.

Consequently, management continues to envision earnings per share to grow in the low 20% percentage range. The guidance includes nearly $500 million impact from share repurchases. Also, it assumes an effective tax rate of 24% for fiscal 2018.

Five Below, Inc. (FIVE - Free Report) has an impressive long-term earnings growth rate of 28% and a Zacks Rank #2 (Buy).

Did you miss Apple's 9X stock explosion after they launched their iPhone in 2007? Now 2018 looks to be a pivotal year to get in on another emerging technology expected to rock the market. Demand could soar from almost nothing to $42 billion by 2025. Reports suggest it could save 10 million lives per decade which could in turn save $200 billion in U.S. healthcare costs. A bonus Zacks Special Report names this breakthrough and the 5 best stocks to exploit it. Like Apple in 2007, these companies are already strong and coiling for potential mega-gains.