Facebook FB reported its third-quarter financial results after the closing bell Tuesday. Shares of FB climbed around 3% in after-hours trading following the release despite falling short of revenue estimates. So, let’s dive into everything important from Facebook’s Q3 earnings results amid a pivotal time for the social media powerhouse.

At the top of the income statement, Facebook saw its third-quarter revenues jump 33% from $10.33 billion the year-ago period to hit $13.73 billion. This did fall short of our quarterly estimate that called for $13.81 billion.

On top of user data worries that have rocked the likes of Twitter (TWTR - Free Report) and even Google parent Alphabet Inc. GOOGL, many investors feared that Facebook’s rising security costs would dramatically impact the company’s margins. Facebook said as much last quarter when it projected that its operating margin would fall to the "mid-30s on a percentage basis" over a more than two-year period.

Mark Zuckerberg’s firm posted an operating margin of 44% in Q2, which already marked its lowest level in the previous five quarters. The third-quarter marked the continuation of this decline, with Facebook’s operating margin down from 50% in the year-ago quarter to 42% in Q3.

Facebook’s total quarterly costs and expenses jumped from $5.21 billion to $7.95 billion. The firm’s capital expenditures reached $3.34 billion in the quarter, which marked a sequential drop from Q2’s $3.46 billion. It is worth pointing out that FB’s capex was $2.81 billion in Q1 and $2.26 billion in the fourth quarter of 2017.

Facebook makes nearly all of its money from advertising, with 98.3% of the firm’s Q3 revenues coming from ads. Mobile advertising revenue made up roughly 92% of Facebook’s ad sales, which marked a 4% jump from the year-ago quarter’s 88%.

Moving on, Facebook closed the quarter with 1.49 billion daily active users, which represented a 9% climb from the third quarter of 2017. Meanwhile, the firm’s monthly active users popped 10% to 2.27 billion, which fell slightly below the 2.29 billion some analysts were expecting. Both DAUs and MAUs climbed by 11% in the second quarter.

These user totals are still somewhat mind-blowing, with the company estimating that more than 2.6 billion people now use Facebook, WhatsApp, Instagram, or Messenger each month—which is roughly 35% of the global population.

Yet, as Facebook continues to grow it will be harder and harder to post impressive enough quarterly growth for some investors. More specifically, some of its key regions continue to prove troublesome. The U.S. & Canada and Europe accounted for roughly 73% of Facebook’s Q3 revenues, yet their total MAUs made up just 27% of its global total.

Facebook’s MAUs in the U.S. & Canada climbed from 239 million in the year-ago period to reach 242 million, which fell in line with on our NFM estimate. This did also mark a 1 million sequential jump. Meanwhile, Europe MAUs popped from 364 million in the third quarter of 2017 to 375 million. But Facebook saw its MAUs slip by 1 million sequentially for the second quarter in a row in the region. 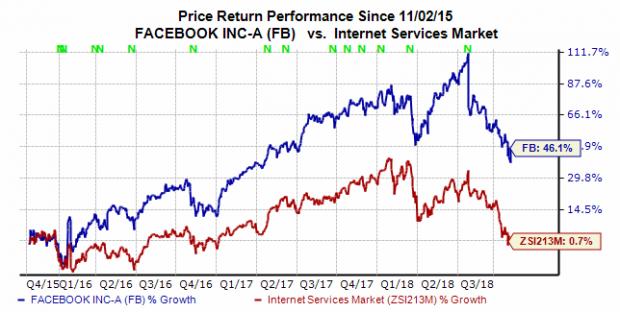 Facebook’s MAUs in its Asia-Pacific region climbed by 123 million to 917 million, which fell short of out 922 million estimate. It is worth noting that Facebook’s DAUs and MAUs do not include Instagram, WhatsApp, or Oculus users “unless they would otherwise qualify as such users, respectively, based on their other activities on Facebook.”

Maybe more importantly, especially as user growth slows, Facebook’s average revenue per user in the U.S. and Canada—where it made roughly 49% of its revenues in the quarter—hit $27.61. This marked a 30% jump from $21.20 in the year-ago period, but fell well short of our NFM estimate that called for ARPU of $30.31. FB’s worldwide ARPU popped 20% from $5.07 to touch $6.09, which fell just short of our estimate.

Investors clearly have a lot to digest here, but it is obvious that Facebook is in the midst of a significant business transition that might last a long time. Making matters worse, Zuckerberg warned on Facebook’s conference call that revenue growth could slow as the social media powerhouse shifts from news feed to Stories as the primary format for the platform.

Looking forward, the company will remain important to advertisers as people become harder to reach through TV due to the rise of subscription-based streaming giants like Netflix NFLX and Amazon AMZN. The key for Facebook could come down to its ability to successfully bolster Facebook Watch and monetize streaming video.