In trials, Nokia Bell Labs achieved an 80% reduction in carbon dioxide emissions together with a reduction of up to 30%  in energy operating expenses. Notably, the use of liquid cooling helps operators to achieve additional savings by allowing them to discard air conditioning and fans. As a matter of fact, this will help in extending the base station component life apart from creating silent sites.

The Finnish company is well-positioned for the upcoming technology cycle given the strength of its end-to-end portfolio. The company’s deal win rate is encouraging with notable successes in the key 5G markets of the United States and China. Its installed base of high-capacity AirScale product, which enables customers to quickly upgrade to 5G, is growing fast. Leveraging state-of-the-art technology, Nokia is transforming the way people and things communicate and connect with each other.

The company is continuously expanding its business into targeted, high-growth and high-margin vertical markets to address growth opportunities beyond its traditional primary markets. Rollouts of next-generation 5G networks are anticipated to improve market conditions significantly in 2019 and beyond.

In the past three months, this Zacks Rank #3 (Hold) company has returned 4.1% against industry’s decline of 10.4%. 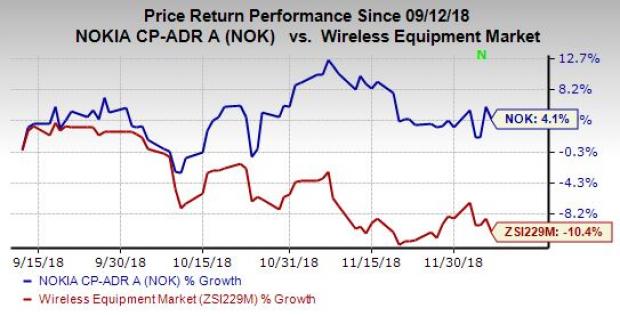 However, the company has considerable operations in geographies outside the United States. Its significant international presence exposes it to political and economic disruptions, all of which can directly impact its profits.

Qualcomm outpaced estimates in each of the preceding four quarters, the average being 18.47%.

Juniper Networks surpassed estimates in each of the trailing four quarters, the average being 10.99%.

Is Barrick Gold (ABX) a Great Stock for Value Investors?