For the deal, Credit Suisse (CS - Free Report) acted as the exclusive financial advisor, with Winston & Strawn LLP being the legal advisor to Chart Industries.

Earlier, the company completed the buyout of VRV S.r.l. and its subsidiaries. The acquisition is likely to be conducive to its Energy & Chemicals and Distribution & Storage businesses going forward. As a matter of fact, the company anticipates the deal to bolster its revenues by $120 million in the first year of ownership completion. The buyout is also anticipated to be accretive to the company’s earnings per share performance and is likely to bring in significant cost synergies. 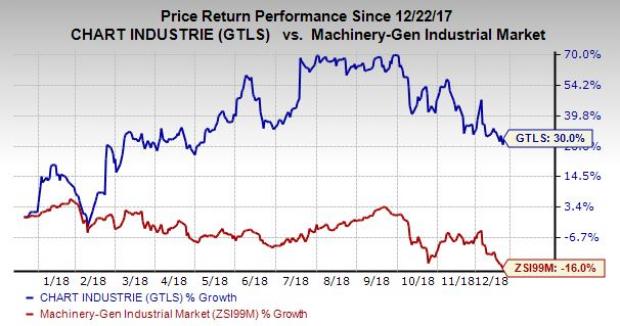 In the past year, the Zacks Rank #3 (Hold) company’s shares have returned 30% against 16% decline recorded by the industry it belongs to.

Applied Industrial Technologies outpaced estimates in each of the preceding four quarters, the average earnings surprise being 11.67%.