Macy's (M) Disappoints With Holiday Numbers, So Do JCP & KSS

Shares of Macy’s, Inc. (M - Free Report) nosedived 17.7% on Jan 10 as the retailer disappointed investors with its holiday sales numbers that compelled management to trim full-year sales and earnings projection. Well this Cincinnati-based department store operator was not the only one that witnessed a lackluster performance, Kohl's Corporation (KSS - Free Report) and J. C. Penney (JCP - Free Report) also met with similar fate.

Industry experts pointed out that even a robust consumer environment on account of strong job picture, higher disposable income and improved consumer confidence, did not work in favor of these retailers. We noticed that shares of Kohl's and J. C. Penney were down 4.8% and 4.5%, respectively, yesterday. Analysts stated that stiff competition from e-commerce players such as Amazon (AMZN - Free Report) and a constant struggle to cope up with rapidly changing consumer trends might have taken a toll on the performance.

Despite taking a slew of measures such as Backstage, Vendor Direct, Store Pickup, Loyalty Program and Growth50 stores, Macy’s posted weaker-than-expected sales figures for the festive season. Comparable sales on an owned plus licensed basis increased 1.1% during November and December period combined, while on an owned basis, comparable sales inched up 0.7%. However, digital business of this Zacks Rank #2 (Buy) company remained robust and recorded double-digit growth. You can see the complete list of today’s Zacks #1 Rank (Strong Buy) stocks here.

Management did inform that Macy’s kick-started the season on a solid note primarily during Black Friday and the following Cyber Week but lost momentum in the mid-December period only to regain some pace during Christmas.

Following an unimpressive holiday sales report, Macy’s lowered its fiscal 2018 view. The company now expects comparable sales on an owned plus licensed basis to increase about 2%, down from the prior expectation of 2.3-2.5% growth. Net sales are expected to remain flat year over year compared with earlier expectation of a 0.3-0.7% increase. The company now envisions earnings in the band of $3.95-$4.00 per share, down from its prior view of $4.10-$4.30. 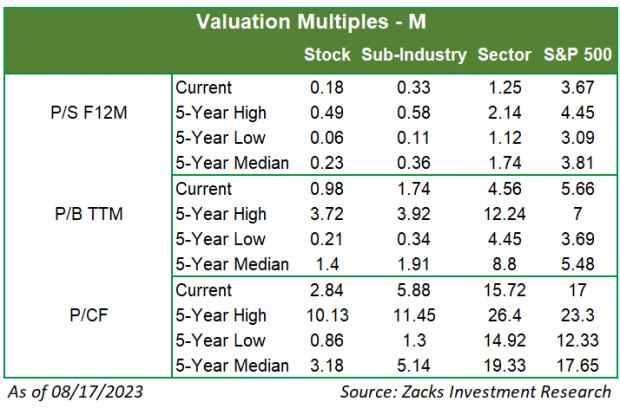 J. C. Penney’s comparable store sales for the nine-week period ended Jan 5, dipped 3.5% on a shifted basis. The metric declined 5.4% on an unshifted basis. However, the company reiterated its target of generating positive free cash flow for fiscal 2018. It continues to anticipate inventory reduction of 8% and projects liquidity in excess of $2 billion by the end of the fiscal year.

This might bring a sigh of relief to the company as it has been grappling with high level of inventory, which in turn is hurting profitability. In this regard, management plans to right size inventory levels and shut down stores to help the company focus on core brands and categories that fetch profitable sales. This Zacks Rank #3 (Hold) company plans to shut down three stores this spring as part of its evaluation program.

Kohl’s holiday sales results failed to lift investors’ spirits, as the growth rate showed a sharp deceleration from the prior-year period. Even an upbeat earnings view for fiscal 2018 did not appease them. We note that comps for the November-December period jumped 1.2% compared with year-earlier increase of approximately 6.9%.