Adjusted earnings (before special items) also declined 67.7% from the year-ago figure of 31 cents. The company has been facing unfavorable average sales realizations for lumber and oriented strand board, lower volumes and operating rates for lumber as well as engineered wood products, along with higher unit manufacturing costs. 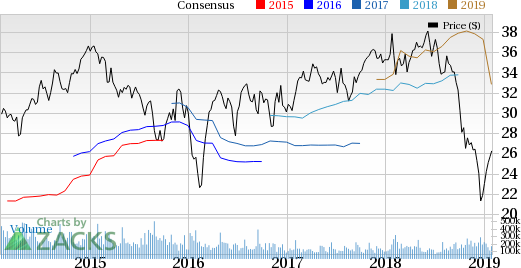 Net sales in Timberlands (accounting for 40.6% of total net sales) during the fourth quarter were $664 million, down 7% from the year-ago figure of $714 million. Adjusted earnings before interest, tax, depreciation and amortization (Adjusted EBITDA) came in at $188 million versus $252 million a year ago, reflecting a decline of 25.4%.

Real Estate, Energy and Natural Resources’ net sales (6.2%) were $102 million. The reported figure increased 2% from the year-ago period. Adjusted EBITDA also grew 3.3% to $90 million from $87 million a year ago.

Inter-segment sales came in at $205 million during the reported quarter.

Adjusted EBITDA was $346 million in the quarter, decreasing 37.2% year over year.

In the reported quarter, the company generated net cash of $292 million from operating activities versus $354 million a year ago. During the fourth quarter of 2018, the company repurchased approximately $75 million of its common stock.

For the full year of 2018, Weyerhaeuser’s top and bottom lines missed the Zacks Consensus Estimate by 3.8% and 3.3%, respectively. Nevertheless, its adjusted earnings of $1.18 per shares and net sales of $7,476 million increased 2.6% and 3.9%, respectively, on a year-over-year basis.

In the Real Estate, Energy and Natural Resources segment, the company anticipates sequentially higher earnings and adjusted EBITDA in the first quarter on the back of favorable Real Estate transactions. However, royalties from Energy and Natural Resources operations are likely to be seasonally lower. Nonetheless, the segment’s adjusted EBITDA for full-year 2019 will be roughly $260 million.

In the Wood Products segment, it predicts significantly higher earnings and adjusted EBITDA sequentially. The upside was mainly driven by seasonally higher volumes and operating rates, improved unit manufacturing costs, along with decreased Western and Canadian log prices in the fourth quarter of 2018.

Gates Industrial, Altair Engineering and Great Lakes’ earnings for the current year are expected to increase 44.6%, 23.1% and 111%, respectively.