However, the earnings picture for Q4 looks lackluster. The Basic Materials sector is expected to lose momentum in Q4 as earnings for the sector are projected to decline 1.4% on 2.2% higher revenues, per the latest Earnings Preview. In fact, the sector is among the four Zacks sectors that are expected to see lower year-over-year earnings in Q4.

The mining industry had a turbulent 2018, weighed down by a slump in metals prices. Metal prices remained subdued last year due to the trade tussle between the United States and China. Further, concerns over a possible slowdown in China, the biggest metal consumer, also weighed on prices.

Nevertheless, prices of precious metals have gained some lost ground of late. In particular, gold prices have broken above the psychologically important $1,300 an ounce threshold. Prices have found support from the Federal Reserve’s dovish turn, geopolitical worries and global growth concerns. The Fed left interest-rates unchanged at its recently concluded meeting and pledged to adopt a measured approach to further rate hikes considering the prevailing economic situation.

Meanwhile, the gold mining industry is currently witnessing a consolidation wave. The big players in this space are taking the consolidation route to boost their production as well as growth profile amid weakness in prices and depleting gold reserves. The recently completed merger of Barrick Gold Corporation (GOLD - Free Report) and Randgold Resources, and the proposed $10 billion mega-merger between Newmont Mining Corporation NEM and Goldcorp Inc. GG bear huge testimony to these strategic moves.

The gold mining industry is facing serious supply problems. Gold production is likely to drop eventually, as new discoveries remain scarce, existing resources are dwindling and grades are declining. These factors will likely compel more miners to resort to adding reserves through acquisitions than digging for new ones which are inherently risky and capital intensive. With risks of dwindling supply looming large on the gold mining industry, there is a likelihood of more mergers and acquisitions in the space.

Copper also had a rough 2018 with prices of the red metal falling around 20% for the year (also down by double digits in Q4). Prices of this major industrial metal slumped to their lowest level in more than a year in December amid concerns over demand for the metal due to U.S.-China trade tensions and a weakening Chinese economy. Tepid economic data from China — the world’s biggest consumer of copper — has raised concerns of potential weaker demand for the commodity. However, copper prices got a boost recently from the Federal Reserve’s dovish shift.

Amid a challenging environment, miners remain focused to whittle down operational costs and capital spending, improve operating efficiency within existing mines, pay down debt, eliminate non-core assets and concentrate on their highest ore-grade assets. Some of these companies have also taken steps to bring down their all-in sustaining costs – the most important cost metric of miners. These actions are expected to support their margins in Q4. However, lower metal prices and weak productions will likely be a drag for miners.

How to Pick the Winners?

Given the large number of players operating in the mining space, picking the right stocks is apparently not an easy task. But our proprietary methodology makes it fairly simple. One can trim down the list with the combination of a favorable Zacks Rank — Zacks Rank #1 (Strong Buy), 2 (Buy) or 3 (Hold) — and a positive Zacks Earnings ESP. You can uncover the best stocks to buy or sell before they report with our Earnings ESP Filter.

Earnings ESP — the percentage difference between the Most Accurate Estimate and the Zacks Consensus Estimate — is our proprietary methodology for determining stocks that have high chances of delivering earnings surprises in their next announcements. Our research shows that for stocks with this combination, the chance of a positive earnings surprise is as much as 70%.

Below we list four mining stocks that have the right combination of elements to pull off positive surprises this earnings season:

New Gold Inc. NGD is an intermediate gold mining company with assets in Canada and Mexico. It is scheduled to release Q4 results on Feb 14. The stock has an Earnings ESP of +166.7% and carries a Zacks Rank #2. The company delivered a positive earnings surprise of 66.7% in the last reported quarter. You can see the complete list of today’s Zacks #1 Rank stocks here.

Osisko Gold Royalties Ltd OR is a mining company, which is engaged in exploration and mining for gold and other precious metals. The company is scheduled to release Q4 results on Feb 20. The stock has an Earnings ESP of +60% and a Zacks Rank #3. The company delivered a positive earnings surprise of 200% in the last reported quarter. 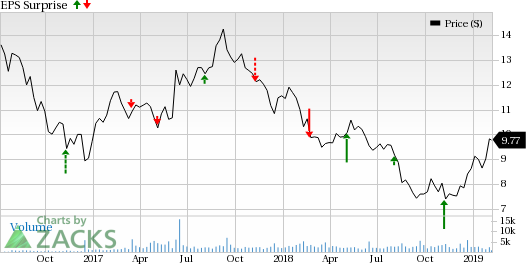 Hudbay Minerals Inc. HBM is a mining company and engages in the discovery, production and marketing of base and precious metals in North and Central America. It is slated to release Q4 results on Feb 19. This Zacks Rank #3 stock has an Earnings ESP of +100%. The company delivered a positive earnings surprise of 350% in the last reported quarter.

Teck Resources Limited TECK is a diversified resource company committed to responsible mining and mineral development with major business units focused on copper, steelmaking coal, zinc and energy. The company is scheduled to report Q4 results on Feb 13. The stock has an Earnings ESP of +4.81% and carries a Zacks Rank #3. The Zacks Consensus Estimate for Q4 earnings has been revised 3.7% upward over the last 60 days.

Bet High on Earnings Beat by These 6 Tech Stocks