The railroad industry seems to be poised well not only in the near term but also in the long haul on the back of robust freight demand fueled by a buoyant U.S. economy. A strong U.S. economy supports the bullishness of freight railroad operators, as it implies that more goods are being transported across the country.

The robust financial health of railroads bears testimony to the fact that the scenario has improved considerably for players in this industry despite coal-related headwinds. Currently, nearly 35% of the U.S. exports are shifted to the ports by freight railways. Year to date, the freight railroad industry has grown 18.9% compared with the benchmark S&P 500 index’s increase of 10.7%.

Growth of intermodal volumes in recent years is anticipated to drive railroads’ top line. Volumes at this key revenue generating unit rose 5.6% in 2018, thanks to an increasing number of freight conversions from highway to rail owing to limited truck supply.

Intermodal segment has improved significantly in 2019. In the first six weeks of 2019, intermodal volumes rose 1% year over year to 1,593,681 units. Strong intermodal volumes have been bolstering railroads’ top line and the uptrend is likely to continue going forward. Improving prospects of intermodal segment has been benefiting railroads since the beginning of the year. Further, the railroad operators’ sustained cost-reduction efforts are anticipated to drive the bottom line going forward.

Although coal volumes have historically contributed the maximum to rail carloads, the companies have shifted their dependence to intermodal owing to dwindling coal volumes.  Notably, intermodal now reportedly dominates overall carloads. Apart from a low truck count, growing e-commerce demand is another factor fueling growth of intermodal. Consequently, the sluggish coal scenario is likely to be less of a hindrance for railroads.

The Association of American Railroads (“AAR”), the industry body of the class 1 freight railroad operators, reported that U.S. rail traffic (including carloads and intermodal units) was pegged at 519,779 for the week ended Feb 9, 2019. This reflects year-over-year increase of 0.1%. Three of the 10 carload commodity groups reported an increase compared with the same week in 2018. Total U.S. rail traffic for the first six weeks of 2019 was 3.074.434 carloads, up 0.9% year over year.

Additionally, railroads have been witnessing an improvement pertaining to another key metric -- operating ratio (operating expenses as a percentage of revenues) in 2019. The lesser the value of operating ratio, the better, as it implies that more cash is available to the company to reward shareholders through hike in dividends or share buybacks. 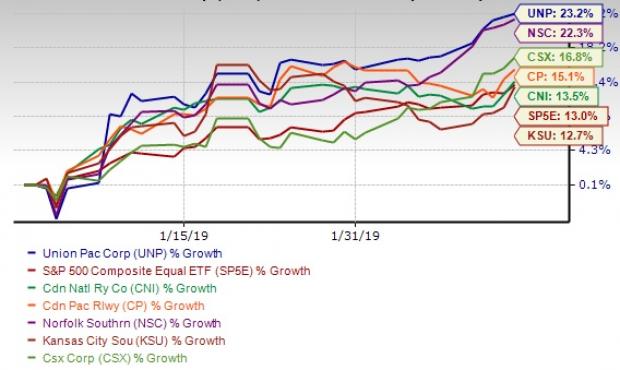