Based in Southfield, MI, the company is currently among the world’s largest designers and manufacturers of aluminum road wheels for the automotive industry.

In first-quarter 2019, Superior Industries’ wheel unit shipments declined due to lower shipments in North America operations along with some softness in Europe.

Apart from this, enforcement of WLTP emission standards in Europe has led to a slowdown in the company’s European operations. The sluggishness is expected to continue through the second quarter.

Additionally, it is exposed to foreign currency fluctuations. A weaker euro compared with a U.S. dollar exchange rate led to a decline in net sales in the last reported quarter. Lower aluminum prices and reduced volume are other factors that are hurting the company.

However, Superior Industries’ strong market presence in Europe owing to the Uniwheels acquisition has enabled it to diversify OEM customers. Also, the company is positioned well among its industry peers.

The company is in the process of undertaking different initiatives to maintain its leading position and reduce costs. It aims to achieve this objective through technological improvements, better operational and procurement practices as well as thorough factory maintenance.

Superior Industries is also focused on debt reduction and profitable investments in its business. The company’s investments in new manufacturing processes and commitment to serve global customer base by introducing unconventional technologies are likely to strengthen its market position.

In the past six months, Superior Industries has underperformed the industry it belongs to. During the same time frame, the company’s shares have plunged 49.8% against the industry’s rise of 6.6%. 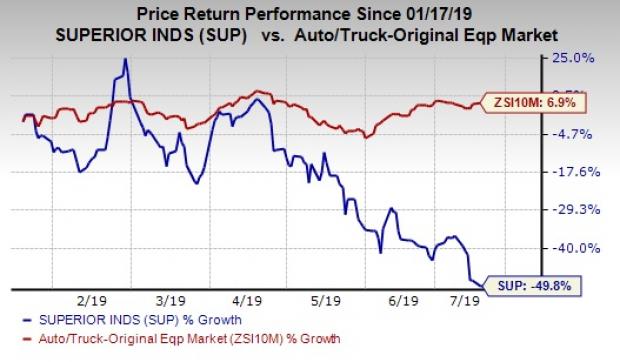 Ford has an expected long-term growth rate of 7.3%. In the past six months, shares of the company have gained 24.6%.

CarMax has an expected long-term growth rate of 12.57%. In the past six months, shares of the company have rallied 37.5%.

AutoZone has an expected long-term growth rate of 12.2%. In the past six months, shares of the company have shot up 39.9%.