Including one-time items, the company’s earnings per share came in at 28 cents compared with the prior-year quarter’s 50 cents. 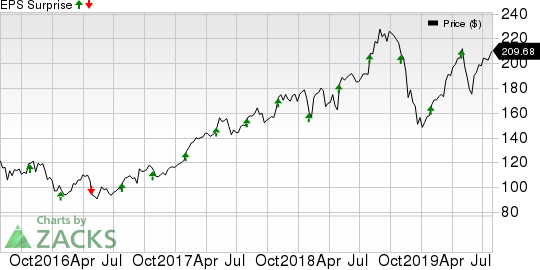 The Closures segment’s revenues declined 4% year over year to $363.4 million. Adjusted operating income was $47.1 million in the reported quarter, down 1.26% from the prior-year quarter.

In the Plastic Containers segment, revenues edged down to $154.2 million from $155.4 million reported in the prior-year quarter. The segment reported an adjusted profit of $13.5 million, up from $13.4 million in the year-ago quarter.

The company reported cash and cash equivalents of $111.3 million at the end of the second quarter, down from the year-earlier quarter end’s balance of $181.2 million. The company utilized $129 million of cash in operations during the second quarter compared with $93 million in the prior-year quarter.

This June, Silgan announced the wrapping up of its two metal container manufacturing facilities in Mt. Vernon, MI and Waupun, WI. Both facilities are expected to be shut down during the fourth quarter this year. As a result, the company recognized pre-tax rationalization charges of $2.5 million during the reported quarter. These plant closures also mark the company’s complete withdrawal from the Central States Pension Fund. In the second quarter, the company recognized pre-tax rationalization charge of around $36.2 million for withdrawal liability.

Silgan has maintained its adjusted earnings per share in the range of $2.10 to $2.20 for the ongoing year compared with the prior year’s $2.08. The guidance for 2019 includes an unfavorable non-cash pension impact of approximately 13 cents per share resulting from significant market declines in investment values at the end of 2018 that negatively impacted the assets held in the company’s pension plans.

Over the past year, Silgan Holdings’ stock has gained 13.5% compared with the industry’s growth of 58.1%.

John Bean Technologies has an expected earnings growth rate of 5.9% for the current year. The stock has appreciated 10.2% in a year’s time.

CECO Environmental has an impressive projected earnings growth rate of 84.8% for the ongoing year. The company’s shares have rallied 30.2% over the past year.

Roper Technologies has an estimated earnings growth rate of 9.8% for 2019. The company’s shares have gained 20.4% in the past year.