Sohu.com Inc. (SOHU - Free Report) reported second-quarter 2019 non-GAAP loss of $1.27 per share, remaining flat with the year-ago quarter’s loss. The reported loss was wider than the higher end of management’s guided range of loss of 95 cents and $1.20.

The company reported GAAP loss of $1.35 per share, wider than the year-ago loss of $1.23. However, the figure was narrower than the Zacks Consensus Estimate of a loss of $1.55.

Revenues of $474.8 million were down 2.3% year over year and came within the guided range of $469–$494 million. Improved performance of the company’s online game businesses and cost savings initiatives couldn’t mitigate the decline in brand advertising domain.

However, on a constant currency basis, revenues of $507 million represent growth of 4% year over year.

The company’s top-line was negatively impacted by a decline in ad spending that can be attributed to overall softness in macroeconomic conditions. Moreover, trade war between the United States and China remains a growth deterrent.

Further, sluggishness in IT and auto industry is keeping management cautious. Efforts to diversify end-markets and explore new growth verticals with increasing spend on product enhancements are likely to weigh on near-term profitability. 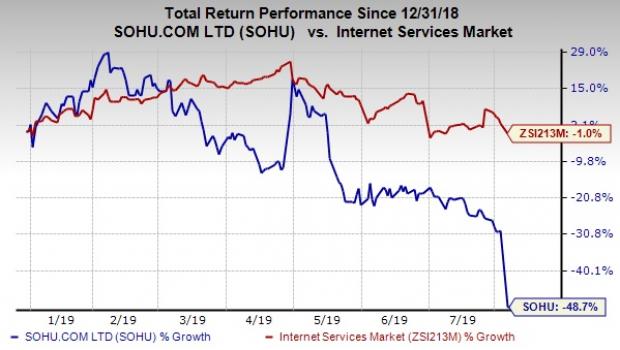 Notably, the company’s stock has shed 48.7% year to date, compared with the industry’s decline of 1%.

Online game revenues of $102.1 million were up 8.4% from the year-ago quarter, primarily due to improvement in performance of “Changyou's older games” and positive impact of promotional activities undertaken during the quarter.

Meanwhile, other revenues declined almost 12% year over year to $52.7 million.

Sohu Media Portal non-GAAP revenues were down 27% on a year-over-year basis to $24 million. The company continues to support third-party writers to deliver engaging content, with an aim to boost user retention.

The company is focused on improving content on the platform to improve user engagement levels and gain good advertising revenues. Additionally, Sohu is striving to enhance content across Sogou Video App, Sohu News App and HOYO, to get more people to use the product.

Non-GAAP gross margin in the quarter contracted 100 bps on a year-over-year basis to 43%.

Non-GAAP gross margin of the company’s online advertising business contracted 200 bps on a year-over-year basis to 33%.

Brand advertising business margin expanded 500 bps on a year-over-year basis to 28%. The improvement was primarily driven by a decrease in video content cost. Non-GAAP gross margin of the search and search-related business in the quarter contracted 400 bps to 34%. The decrease was particularly due to higher traffic acquisition cost.

As of Jun 30, 2019, Sohu’s cash and cash equivalents (and short-term investments) came in at $1.698 billion compared with $1.882 billion reported at the end of previous quarter.

Brand Advertising revenues are anticipated to be in the range of $45-$50 million, indicating a year-over-year decrease of 12-21%.

Online game revenues are expected in the band of $80-$90 million, suggesting year-over- year decrease of 6-17%.

Non-GAAP net loss is anticipated to be in the range of $22-$32 million. Non-GAAP loss per share is projected to be between 55 cents and 80 cents.

The Zacks Consensus Estimate is pegged at loss of 1.08 cents.

A better-ranked stocks in the broader technology sector worth considering is Rosetta Stone , flaunting a Zacks Rank #1 (Strong buy). You can see the complete list of today’s Zacks #1 Rank stocks here.

What's in Store for Approach Resources (AREX) in Q2 Earnings?