Westlake Chemical Corporation (WLK - Free Report) saw lower profits in the second quarter of 2019, hurt by reduced sales prices for its major products. The chemical maker posted a profit of $119 million or 92 cents per share for the quarter, down around 57% from $278 million or $2.12 it earned in the year-ago quarter.

Sales fell roughly 4% year over year to $2,144 million. However, the figure surpassed the Zacks Consensus Estimate of $2,098.9 million.

Sales in the Olefins segment fell 1% year over year to $477 million in the quarter. Operating income in the segment tumbled roughly 48% to $82 million. The decline was mainly due to reduced sales prices and margins for major products.

Cash flow from operations was $320 million for the reported quarter.

Westlake Chemical noted that it faced challenges, in the second quarter, from lower commodity pricing due to slowing global growth and industrial activity, and logistics constraints and delay in shipments of its major products due to flood in the continental United States. Moreover, prolonged winter weather in much of North America led to a sluggish start of the construction season.

The company is seeing some improvements in industry fundamentals which it expects to continue into second-half 2019.

Shares of Westlake Chemical have lost 36.9% in a year’s time compared with the industry’s 41.8% decline. 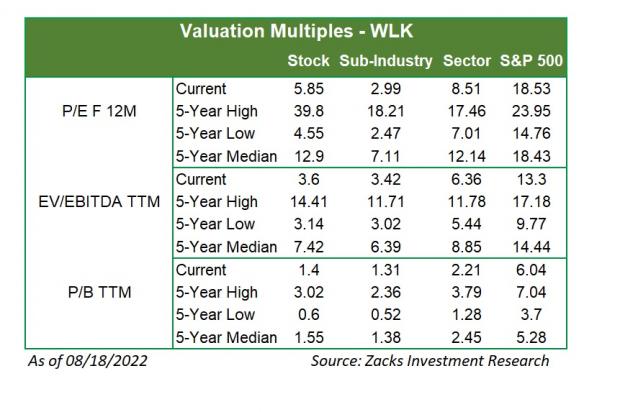 SSR Mining has an estimated earnings growth rate of 134.8% for the current year and carries a Zacks Rank #1 (Strong Buy). Its shares have rallied 65% in the past year. You can see the complete list of today’s Zacks #1 Rank stocks here.

Kinross has projected earnings growth rate of 110% for the current year and carries a Zacks Rank #1. The company’s shares have gained 46% in a year’s time.

Flexible Solutions has an expected earnings growth rate of 342.9% for the current fiscal year and carries Zacks Rank #2 (Buy). Its shares have surged around 118% in the past year.