Adjusted earnings per share of 79 cents beat the consensus mark by 6 cents and improved 39% on a year-over-year basis. The upside was driven by profitable rentals (as evident from its eighth consecutive quarter of increased leisure pricing in the Americas) and the company’s ability to capitalize on a strong residual fleet environment.

The company is benefiting from its partnerships with Lyft, Via, Fetch, Waymo and Otonomo. Recently, it entered into a new partnership with Uber to expand its ride-hailing fleet initiative. Such strategic moves open up ample opportunities within the mobility industry, improve profitability and enhance the company’s position as a global leader in mobility solution.

So far this year, shares of Avis Budget have gained 38.8% compared with 19.8% rise of the industry it belongs to. 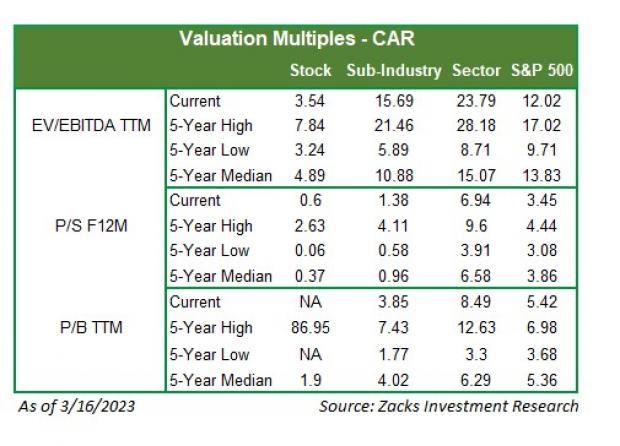 Americas segment revenues of $1.63 billion increased 2% year over year owing to a 2% increase in rental days and 1% increase in revenues per day. The segment accounted for 70% of total revenues.

Revenues at the International segment were down 4% year over year to $710 million. The decline was due to an adverse impact of 6% from currency exchange movements and 1% decrease in revenues per day, partially offset by 3% rise in rental days. The segment contributed 30% to total revenues.

Adjusted EBITDA of $175 million improved 9% year over year on a reported basis and 16% on a constant currency basis. Adjusted EBITDA margin rose to 7.5% from 6.9% in the year-ago quarter. The company witnessed record Net Promoter Scores in both the Americas and International regions.

Adjusted EBITDA for Americas was $152 million compared with $107 million in the prior-year quarter. Adjusted EBITDA margin expanded by more than 250 basis points to 9.3%. The upside was driven by a 10% decrease in per-unit fleet cost due to robust used vehicle values, growing development and usage of alternative disposition channels and effectiveness of proprietary fleet management system, which optimizes vehicle purchase and disposal decisions.

Internationally, adjusted EBITDA of $39 million declined 45% from the prior-year quarter. The decline was due to lower organic rates and foreign currency exchange rate fluctuations arising from reduction in intra-European travel and uncertainty around Brexit. The company is increasing its light commercial vehicle operations, which enjoys consistent rental demand.

Avis Budget reaffirmed its guidance for 2019. Adjusted EPS is expected between $3.35 and $4.20. The current Zacks Consensus Estimate of $4.10 lies within the guided range.

Perrigo (PRGO) Beats on Q2 Earnings and Sales, Stock Up