Adjusted earnings of $2.28 per share outpaced the consensus estimate by 2 cents and increased year over year. The reported figure exceeded the midpoint of the company’s guided range of $2.22-$2.28 per share.

Total revenues of $441.8 million beat the consensus mark by $2 million and improved year over year, driven by double digit growth in all segments. Revenues exceeded the midpoint of the guided range of $438-$443 million.

Shares of the company have gained a massive 43.1% year to date, outperforming the 38.5% rally of the industry it belongs to. 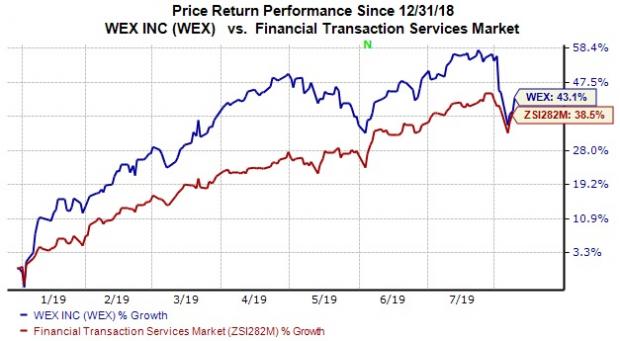 Travel and Corporate Solutions revenues (21%) of $91.4 million were up 21% year over year, driven by strong performance in Corporate Payments business, international markets and contributions from the Noventis acquisition. Purchase volume increased 13% year over year to $10 billion.

WEX exited the second quarter with cash and cash equivalents of $768.4 million compared with $387.3 million at the end of the prior quarter. Long-term debt was $2.8 billion, roughly flat with the prior quarter figure.

WEX expects revenues in the range of $455-$465 million, the midpoint ($460 million) of which is lower than the current Zacks Consensus Estimate of $461.1 million.

The company’s third-quarter guidance is based on an assumed average U.S. retail fuel price of $2.72 per gallon and fleet credit loss ranging between 13-18 basis points.

The company’s full-year guidance is based on an assumed average U.S. retail fuel price of $2.72 per gallon and fleet credit loss ranging between 13-18 basis points. The company also assumes around 43.8 million shares outstanding for the third quarter and full year.

The long-term expected EPS (three to five years) growth rate for Accenture, ExlService and Charles River Associates is 10.3%, 10.6% and 13%, respectively.