On Aug 13, Wall Street rebounded significantly after closing sharply lower in the previous two trading sessions. U.S. stocks continued to face extreme volatility but yesterday’s market movement was toward the positive side buoyed by a statement by the office of the U.S. Trade Representative to delay the next round of tariff to be imposed on Chinese goods.

The United States Trade Representative (USTR) office said that new tariffs on China made certain consumer goods will be delayed by two and half months. Notably, on Aug 1, President Donald Trump has tweeted expressing his desire to impose 10% tariff on a new set of Chinese goods worth $300 billion effective Sep 1.

Importantly, 68% of these tariffs will be implemented on consumer goods, which will likely dent U.S. consumer confidence to a large extent. Trump further said that the tariff rate could go up to 25% later if needed.

However, within two weeks after Trump’s tweet, the USTR said that the new set of tariffs will not be imposed before Dec 15. The products on which tariff will be delayed include certain consumer electronics like cellphones, laptops and video game consoles, several apparel a footwear, certain toys, food and kitchen items, several chemicals, fireworks, baby products and sports equipment. Notably, other items will be completely deleted from the tariff list although the list of those products is yet to be released.

The Trump administration cited “health, safety, national security and other factors” to delete those products from the tariff list. Trump said his government’s decision not to hurt consumer sentiment in the upcoming Christmas season holiday shopping was the reason for delaying tariff on certain categories of consumer goods.

Trade negotiations with China restarted after President Trump abruptly ended the cease-fire with China on Aug 1. On Aug 13, China’s state-run media Xinhua reported quoting China's Ministry of Commerce that the country’s vice premier Liu He had a telephonic discussion with U.S. Trade Representative Robert Lighthizer and Treasury Secretary Steven Mnuchin about trade issues and will talk again in two weeks.

Last week, China decided to stop purchasing U.S. agricultural products and devalued its currency yuan bellow the psychological level of 7 per U.S. dollar to make up for some of the losses due to the U.S. tariff. The United States, on the other hand, decided to delay granting licenses to U.S. companies resume business activities with the Chinese tech behemoth Huawei Technologies.

At this stage, investing in stocks from those product categories for which U.S. tariff on China will be delayed will be prudent. We narrowed down our search to five such stocks each carrying either a Zacks Rank #1 (Strong Buy) or 2 (Buy) and bearing strong growth potential. All five stocks gained impressively in the past three months and still have upside left. You can see the complete list of today’s Zacks #1 Rank stocks here.

Hasbro Inc. (HAS - Free Report) is a global play and entertainment company. From toys and games to television, movies, digital gaming and consumer products, Hasbro offers a variety of ways for audiences to experience its iconic brands. It flaunts a Zacks Rank #1. 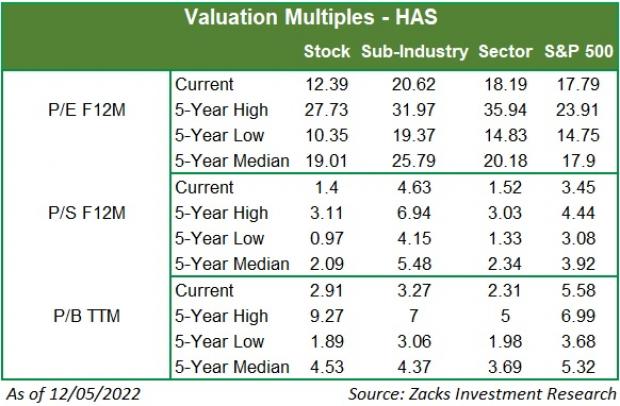 Best Buy Co. Inc. BBY operates as a retailer of technology products, services and solutions in the United States, Canada and Mexico. The company operates in two segments, Domestic and International. It carries a Zacks Rank #2.

Is it Apt to Hold Welltower (WELL) in Your Portfolio Now?