Revenues went up around 6% year over year to $113.1 million in the reported quarter. It beat the Zacks Consensus Estimate of $111.3 million.

The company faced challenges from unfavorable weather in the United States in the reported quarter. This affected its U.S. crop business, in particular, in Midwest and Southeastern regions. However, the company saw double-digit gains in its domestic non-crop and international businesses.

Sales from the U.S. crop business dropped 9% year over year while sales from U.S. non-crop business jumped 37% in the reported quarter. International business saw a 14% increase in sales in the quarter.

Revenues from American Vanguard’s insecticides business for the quarter fell 5% year over year to $36.5 million.

Sales from the herbicides/soil fumigants/fungicides business went up 7% to $37.2 million.

Revenues from the other business, including plant growth regulators, rose 5% to $22.2 million.

American Vanguard ended the quarter with cash and cash equivalents of roughly $6.3 million, down around 11% year over year. Long-term debt was $164.6 million, up around 122% year over year.

American Vanguard sees strong performance from its soil fumigants, cotton harvest products and the Central and South American businesses in the second half. The company backed its revenue guidance for 2019 of roughly $500 million. American Vanguard also expects its gross profit margins to be roughly 38% for 2019.

American Vanguard’s shares are down 10.4% so far this year, underperforming the 16% rise of the industry it belongs to. 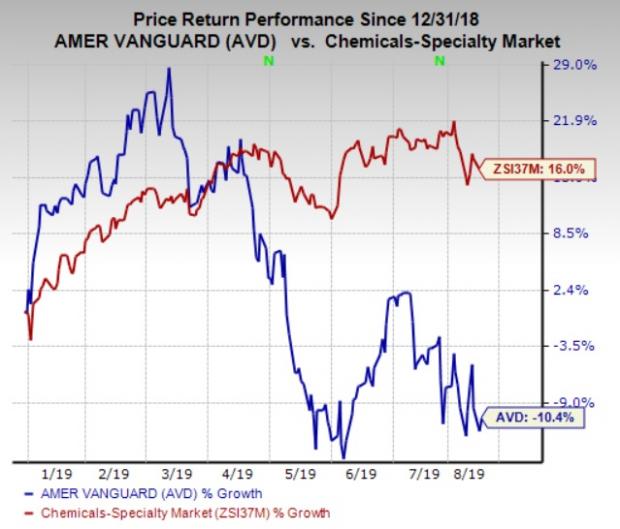 Kinross has projected earnings growth rate of 140% for the current year and carries a Zacks Rank #1 (Strong Buy). The company’s shares have surged around 70% in a year’s time. You can see the complete list of today’s Zacks #1 Rank stocks here.

NewMarket has an expected earnings growth rate of 16.2% for the current year and carries Zacks Rank #1. Its shares have gained around 23% in the past year.

SSR Mining has an estimated earnings growth rate of 134.8% for the current year and carries a Zacks Rank #2 (Buy). Its shares have rallied roughly 80% in the past year.