Sprint Corporation S, which is a subsidiary of SoftBank Group Corp., recently announced that it has launched True Mobile 5G service in areas of Los Angeles, New York City, Phoenix and Washington, DC. These cities are known to be the largest and most dense urban markets in the United States, which requires substantial expertise and stringent testing to ensure quality, performance and delivery. With this move, the company’s next-gen wireless service is presently live in parts of nine major markets.

In May, the national wireless carrier launched 5G service in areas of Atlanta, Dallas-Fort Worth and Kansas City, which was followed by Chicago in middle of July. The company’s 5G spans around 2,100 square miles, with about 11 million people expected to be covered in entirety across all nine market areas in the coming days. Reportedly, this is more than any other U.S. carrier to date.

As the fourth-largest wireless provider (by subscriber count), Sprint’s True Mobile 5G will likely enable new experiences, which include gaming, entertainment services, IoT and business applications, for customers. Markedly, the company has achieved this feat in concert with its technology partner, Nokia Corp. (NOK - Free Report) . At the base of Sprint 5G is Massive MIMO — a breakthrough technology that significantly improves network capacity.

Sprint’s 5G Massive MIMO radios run on its 2.5 GHz mid-band spectrum, and they are deployed on its existing 4G cell sites, providing a nearly identical footprint for both 2.5 GHz LTE and 5G NR coverage.

Looking ahead, the company believes that the completion of initial nine market launches is truly the beginning of what it can achieve, post-merger with T-Mobile US, Inc. TMUS. Jointly, they aim to build a nationwide mobile 5G network that benefits all U.S. enterprises and consumers.

Sprint has long-term earnings growth expectation of 19.6%. Driven by diligent execution of operational strategies, the stock has rallied 15.2% compared with the industry’s growth of 10.6% in the year-to-date period. 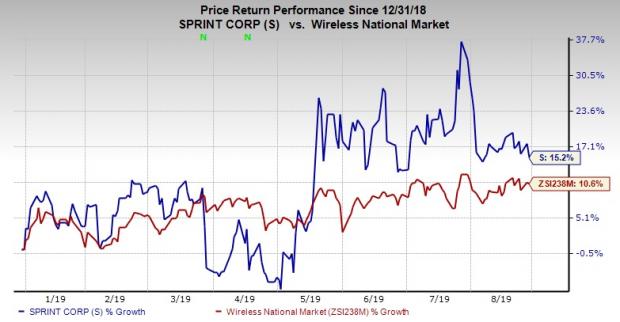 Verizon surpassed earnings estimates in each of the trailing four quarters, the average positive surprise being 2.6%.

Are Investors Wrong in Selling These 4 Finance Stocks Now?