China became the hot spot for investors last week buoyed by dual tailwinds of positive developments in trade dispute and stimulus plan. This is especially true as the world’s two biggest economies are set to resume trade talks next month (read: Momentum ETFs to Buy as US-China Adopt Peacemaking Tone).

The People's Bank of China (PBOC) plans to reduce the amount of cash banks have to keep in reserve for the third time this year to the lowest level since 2007 in order to stimulate the slowing economy. The move will unleash as much as 900 billion yuan ($126 billion) in liquidity with $800 billion yuan effective from Sep 16 and the rest 100 billion yuan in two phases – on Oct 15 and Nov 15. For this, the PBOC has cut the reserve requirement ratio (RRR) by 50 bps for all banks, with an additional 100 bps cut for qualified city commercial banks. This represents the seventh cut in the ratio since early 2008. The RRR for large banks will be lowered to 13.0%.

The bullish fundamentals reflect a turnaround from a month ago, when a sudden plunge in the yuan helped sparked a sell-off in Shanghai shares. Shanghai Composite Index jumped about 3.3% last week, reflecting its best performance since June. Overseas investors pumped a net 26.8 billion yuan ($3.8 billion) into the nation’s domestic stock market, the most since February.

Quite expectedly, solid trading has been felt in the Chinese ETF world too. Funds in this space saw impressive gains last week, signaling some good times ahead, at least in the near term (see: all the emerging Asia Pacific ETFs here). 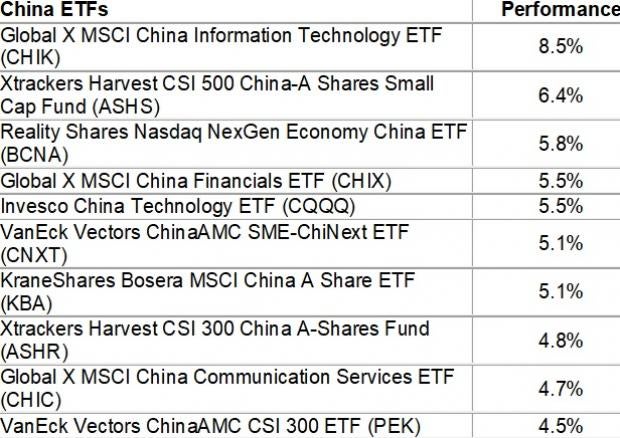 ETFs offering exposure to the technology sector like CHIK and CQQQ and China-A shares including ASHS, CNXT, and KBA are the showstoppers. From the abovementioned ETFs, CQQQ, KBA, ASHR and CHIC have a solid Zacks ETF Rank # 2 (Buy), suggesting their continued strong performance. Meanwhile, ASHS, (CHIX - Free Report) , CNXT and PEK have a favorable Zacks ETF Rank #3 (Hold), indicating room for an upside.

Despite a slew of stimulus since early last year, China’s economy is still struggling due to the trade war with the United States, which is taking a heavy toll on the country’s businesses and consumers. China’s economic growth slowed to a near 30-year low of 6.2% in the second quarter. Business confidence remained shaky and manufacturers’ confidence in August softened to the lowest level.

Exports are still weak even in the face of substantial yuan currency depreciation. In particular, exports fell 1% year over year in August — the biggest fall since June. Most analysts expect export growth to slow down further in the coming months, given the new tariff increases effective Sep 1 and the threat of more U.S. tariffs from Oct 1 and Dec 15. Meanwhile, infrastructure investment rose 3.8% year over year in the first seven months of this year, down from 4.1% in the first half (read: ETFs in Focus on China's Economic Slowdown in August).

Given the increasing risks from the tariff war, most economists including Oxford Economics, Bank of America Merrill Lynch, and Bloomberg Economics recently cut their growth forecast for China economy to below 6% in 2020. World Bank now forecasts 6.1% growth for 2020, down from its previous projection of 6.2%.

Though the world's second-largest economy expanded by 6.3% year over year in the first half of 2019, it is the fastest growth rate among all major economies worldwide. Additionally, tariffs will no longer be a problem for China as the two countries seem to resolve the one-year long issue next month. Yet, volatility still lingers.