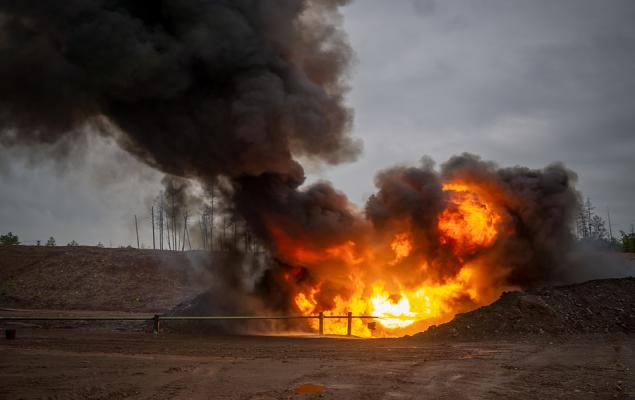 The weekend attacks on Saudi Arabia’s energy installations shook up the world of oil.

On Saturday, unmanned aerial vehicles struck the state-run Saudi Arabian Oil Company’s (Aramco) Abqaiq plant – a key crude processing facility – and the Khurais complex, which houses the kingdom’s second-largest oilfield. The Iran-backed Houthi rebels in neighboring Yemen, who have attacked Saudi targets in the past because of an ongoing conflict, claimed responsibility for the explosions. However, U.S. Secretary of State Michael Pompeo accused Iran directly for the assault.

Such is the extent of damage that it is touted as the ‘single worst sudden disruption ever’ for the oil markets, surpassing the impact of the 1991 Persian Gulf War. WTI crude, the U.S. benchmark, is set to soar more than 10% when market opens on Monday, to around $60 a barrel. This will mark the sharpest daily price rise for the domestic benchmark grade since February 2016, putting the ‘black gold’ at a four-month high. Brent crude – the international standard – is on track for similar price jump, rising to four-month highs of around $67 a barrel.

While Saudi Arabia is expected to bring back a major portion of the suspended oil output within days, it will possibly require weeks to restore 100% production. In the meantime, there could be some windfall gains for the American shale players. To their advantage, the Abqaiq plant and the Khurais oilfield – under temporary suspensions – process and produce a light oil comparable to the ones churned out by the U.S. shale companies. As it is, the upstream oil companies are best positioned to benefit from the oil surge.

The Saudi Arabian supply shock has put the oil market in a fundamentally tight spot and is likely to breathe life back into the sector. Below we present five companies – each focused on one or the other major oil producing basins in the United States (Bakken, Eagle Ford, or the Permian) and carrying Zacks Rank #3 (Hold) – that investors should watch out for. These low-cost producers are expected to gain from the void in world supply on account of drone attacks on two Saudi Aramco oil facilities.

Investors should know that the Bakken and Eagle Ford, together with the Permian Basin constitutes around 90% of total shale oil production domestically. In particular, the Permian shale play accounts for roughly one-third of the total U.S. oil output and is the dominant domestic growth area for onshore oil production.

EOG Resources, Inc. (EOG - Free Report) is the largest crude producer and acreage holder in the Eagle Ford shale, boasting of more than 500,000 net acres. The company has identified 7,200 locations — both drilled and undrilled — with resource potential of around 3.2 billion barrels of oil equivalent.

Chevron’s (CVX - Free Report) substantial Permian holdings of 2.2 million net acres have already realized production growth of 71% in the past year with Chevron targeting output of 900,000 barrels per day in 2023. Investors should also note that Chevron's Permian production of 421,000 barrels per day in the second quarter was up 55% from last year's corresponding period.

Marathon Oil Corporation (MRO - Free Report) has 145,000 net acres in the Eagle Ford. In the second quarter, Marathon Oil churned out an average of 109 thousand barrels of oil equivalent per day (62% oil) from the play.

Whiting Petroleum (WLL - Free Report) is a top-tier operator in North Dakota's Williston Basin, centered on the Bakken formation. The company has over 470,000 net acres in the region, giving it drilling inventory of more than 20 years.

Pioneer Natural Resources Company (PXD - Free Report) is a pure-play Permian basin producer. In the Midland basin, the firm has amassed a large acreage position with operations across 750,000 gross acres of land. In the prolific basin, Pioneer Natural has estimated more than 20,000 drilling sites that are likely to provide the company with decades of crude production.

Here's Why You Should Hold on to Evercore (EVR) Stock Now