Simply Mac is an authorized reseller of Apple products in smaller cities in the United States, with lack of Apple services. Currently, it has 41 retail stores across 18 states in the country. The addition of these stores will enable Cool Holdings to achieve its goal of 200 stores in Americas.

Per sources revealed, the move is part of GameStop’s strategy to shut down its underperforming businesses and focus on areas of high-profit potential. In line with this strategy, some Simply Mac stores were closed in 2017 due to non-productivity issues.

Prior to this divestiture, GameStop concluded the sale of Spring Mobile business on Jan 16, 2019, as part of its comprehensive review process. Going ahead, the company is on track to shut 180-200 underperforming stores worldwide by the end of fiscal 2019.

Further, GameStop is progressing with its business transformation plans that include optimization of portfolio and strengthening its non-gaming businesses. Apart from this, the company is exploring opportunities in the digital arena. Moreover, GameStop is undertaking efforts to revive its physical video game retail business.  In sync with this, the company has undertaken partnerships with Complexity Gaming, Infinite eSports as well as Entertainment and Envy Gaming among others.

All said, we hope that the above-mentioned strategies will boost this Zacks Rank #5 (Strong Sell) stock and help it to get back on track. Notably, shares of this company declined 48.2% in the pasts six months compared with the industry’s decline of 3.2%. 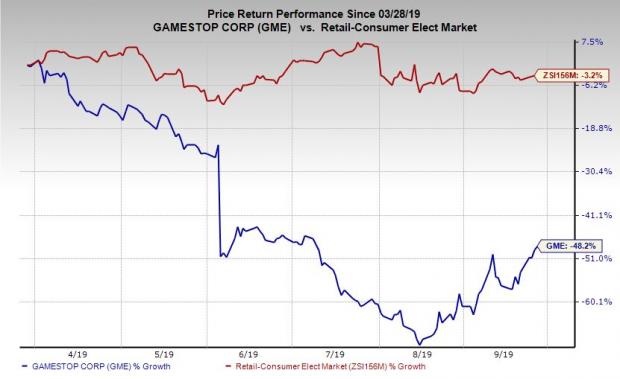 Zumiez (ZUMZ - Free Report) has a long-term earnings growth rate of 13.5% and a Zacks Rank #1 (Strong Buy). You can see the complete list of today’s Zacks #1 Rank stocks here.

Canada Goose Holdings GOOS has a long-term earnings growth rate of 28.5% and a Zacks Rank #2.