Per the terms, the BDS unit will provide SDB weapon integration on selected weapon platforms and support the fielded weapon system. Work related to the deal will be performed in St. Louis, MO, and is scheduled to be completed by September 2024.

With increased cross-border tensions across the globe, both developed and developing countries have been ramping up their defense arsenal over the past decade. Notably, bombs and other major munitions comprise a significant part of the weapon portfolio.

To this end, munitions like SDB’s have seen its importance grow over the years, as militaries of Australia, Belgium, Canada, Denmark, Greece, Israel, South Korea, the Netherlands, Spain, Sweden, Turkey and Singapore have opted for these bombs as one of their preferred choice of munition. Such global acceptance of these bombs significantly benefits its makers like Boeing and Raytheon .

Global Prospects of the Munitions Market

Per Grand View Research, the global munitions market is expected to see a CAGR of 3.5% by 2024 to reach $16 billion. Such growth can be attributed to the rise in terrorism accompanied by continuous stacking of arms and weapons in emerging economies, owing to rising defense expenditures. Such projections, on a whole, should enable Boeing to significantly grow in the expanding global munitions market in the days ahead.

Boeing’s SDB is one of the very few weapon systems of its kind in the global munitions market. Being one of the largest defense contractors in the United States, Boeing serves the U.S. aerospace and defense industry and its allies by producing, integrating and supporting precise, long-range and focused munition capabilities. Currently, the demand for SDB is high, given the fact that apart from the United States, eight foreign allies of the country use this precision weapon.

With more nations bumping up their defense spending, Boeing consistently enjoys frequent order flow from international markets for advanced weapons like SDB. The latest contract win is a further testament to that.

Furthermore, the fiscal 2020 defense budget reflects a solid spending provision of $5.1 billion for munitions. Such allocations should usher in more contracts for renowned munition manufacturers like Boeing.

In the past month, Boein's stock has gained 7.5% compared with the industry’s 5% growth. 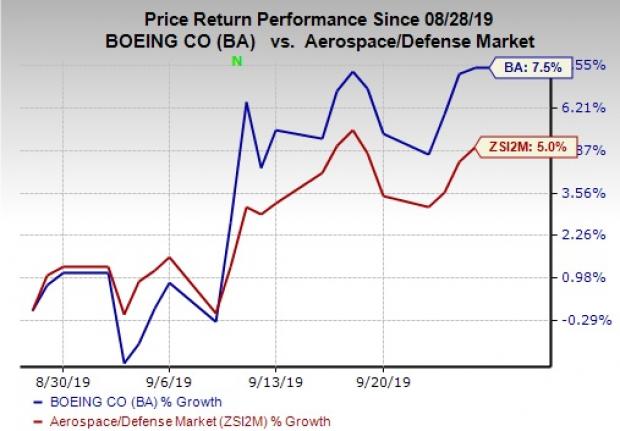 Lockheed Martin came up with average positive earnings surprise of 16.03% in the last four quarters. The Zacks Consensus Estimate for 2019 earnings has increased 3.31% to $21.20 in the past 60 days.

Heico came up with average positive earnings surprise of 1.19% in the last four quarters. The Zacks Consensus Estimate for 2019 earnings has risen 4.1% to $2.30 over the past 60 days.