Huntsman Corporation (HUN - Free Report) recorded profits of $41 million or 13 cents per share in third-quarter 2019 against a net loss of $8 million or 5 cents in the year-ago quarter.

Barring one-time items, adjusted earnings per share were 41 cents in the quarter, down from 71 cents in the year-ago quarter. The figure trailed the Zacks Consensus Estimate of 42 cents.

Polyurethanes: Revenues in the segment fell around 11.8% year over year to $993 million due to lower MDI (methylene diphenyl diisocyanate) average selling prices, which were partly offset by higher MDI sales volumes.

Performance Products: Revenues in the unit declined 14.6% to $281 million due to reduced average selling prices as well as lower sales volumes.

Advanced Materials: Revenues in the unit dropped around 8.2% to $256 million due to lower average selling prices and sales volumes.

Textile Effects: Revenues in the division were down nearly 12.3% to $179 million. The downside was caused by lower sales volumes and average selling prices. Volumes were affected by reduced demand as a result of uncertainties surrounding the U.S.-China trade conflict.

The company repurchased around 4.1 million shares worth roughly $81 million in the quarter.

For the Polyurethanes unit, Huntsman expects consistently stable differentiated margins. It anticipates demand headwinds in major markets across the globe. Also, component MDI margins are expected to stay under pressure.

For Performance Products, the company sees growth in key specialty amines. It also expects some demand headwinds in the maleic anhydride but margins are likely to remain stable. Lower margins and volumes are expected to exert pressure on ethyleneamines.

For Advanced Materials, the company expects stable overall margins amid demand headwinds across most industrial markets.

For 2019, Huntsman expects to spend around $270 million on capital expenditures and roughly $70 million for the Chemical Intermediates Businesses as discontinued operations.

Huntsman's shares have gained around 5.7% in the past year against the industry’s 23.5% decline. 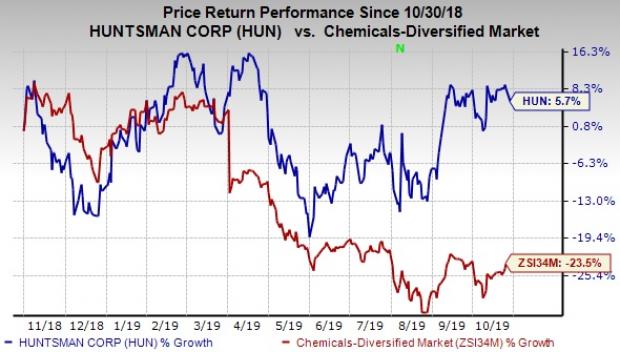 Kirkland Lake Gold has an estimated earnings growth rate of 93.4% for the current year. Its shares have moved up 128.4% in the past year.

What's in the Cards for Fannie Mae (FNMA) in Q3 Earnings?