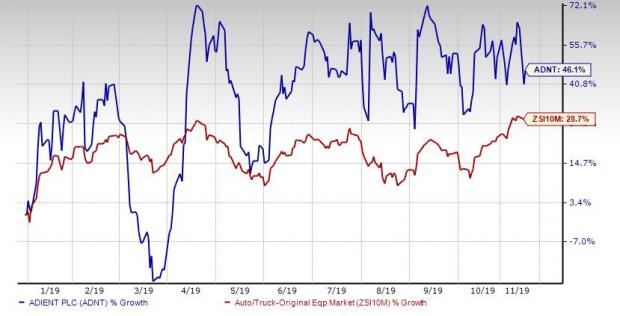 The automotive seating specialist, which was founded as a spin-off from Johnson Controls in 2016, has been performing impressively on the bourses of late. Adient is efficiently executing the plan of stabilizing and improving launch performance, such as ensuring adequate on-time staffing, increasing focus on change management, enhancing readiness and program reviews, cutting costs and early escalation of potential issues.

However, we remain skeptical whether the company will be able to stay on the green zone amid challenging macro-economic headwinds. While its CEO Doug Del Grosso, which took the helm in October 2018, is making restructuring efforts to boost the firm’s prospects, macroeconomic headwinds are likely to impede the company’s bull run.

So far in 2019, auto sales across the globe have declined, which put pressure on Adient’s sales as the company is heavily dependent on cyclical end-market demand. Evidently, fiscal 2019 sales of the company totaled $16.5 billion, down 5.2% year over year. The company expects sales for fiscal 2020 between $15.6 billion and $15.8 billion, indicating a decline of roughly 5% year over year from the midpoint of the guided range. Sagging foreign sales and production will continue to adversely impact Adient’s foreign revenue mix

While results from the Americas segment were still satisfactory, Adient’s two largest foreign operating markets — Europe and China — witnessed weaker year-over-year auto sales and the trend is likely to persist. The company’s heavier foreign sales mix exposes it more to global economic slowdown than some of its peers that hold a larger domestic market share. Notably, Adient currently operates through three reportable segments — Americas, which includes North America and South America; Europe, Middle East, and Africa (“EMEA”); and Asia Pacific/China (Asia). While the geographic sales percentage for the Americas accounted for 47% of total revenues in fiscal 2019, EMEA and Asia contributed 40% and 13%, respectively.

With the primary headwinds are expected to continue, the turnaround program is likely to take time to bring the company back to its former glory. Consumer spending in China is weak at the moment, amid economic slowdown concerns and trade tensions. Moreover, passenger vehicle sales are weak in China and so is the demand for Adient’s products.

Economic headwinds and industry-specific factors including GV6 emission standards are resulting in a decline in passenger vehicle sales of the country. Lower income from Adient's joint ventures with Chinese suppliers is also a worry. Resultantly, the company is expected to witness a decline in deliveries in the markets served in China.Europe is also expected to see lower volume of launches and complexity for both complete seats and the SS&M business. Further, economic slowdown amid Brexit uncertainty and unfavorable foreign currency translations are likely to clip its margins, going forward.

Adient’s high leverage is also a cause of concern. The company’s long-term debt increased 8.8% year over year to $3.7 billion in fiscal 2019. Debt-to-capital ratio stands at 66.7%, which restricts the firm’s financial flexibility.

In the wake of such headwinds, investors should better avoid the stock at this moment, despite its strong stock price movement. Notably, Adient carries a Zacks Rank #5 (Strong Sell). Some better-ranked players in the same industry include Horizon Global Corporation , BRP Inc. (DOO - Free Report) and Veoneer, Inc. (VNE - Free Report) , each carrying a Zacks Rank #2 (Buy). You can see the complete list of today’s Zacks #1 Rank (Strong Buy) stocks here.