Valley National Bancorp (VLY - Free Report) received the required shareholder and regulatory approvals to complete the acquisition of Oritani Financial Corp. for $740 million. With an aim to further expand presence in New Jersey, Valley National had announced the deal in June 2019.

The all-stock merger is expected to be effective on Dec 1, 2019, subject to remaining closing conditions.

Notably, in August, the company already received regulatory approval from the Office of the Comptroller of the Currency (“OCC”).

At the time of announcement, it was agreed that shareholders of Oritani will receive 1.60 shares of Valley National for each Oritani share they own.

Also, it was stated that Oritani’s dividend payout policy for the quarter would not be impacted by the deal.

Moreover, Kevin Lynch, chairman, president & CEO of Oritani, is expected to join the board of directors of Valley National, following the closure of the agreement.

Valley National stated that it projects 50% cost savings, “in addition to those related to legacy Oritani benefit plans.” However, the company has not made any assumption of cost synergies, owing to branch closures, though both companies have “100% of their respective branches within a 3-mile radius of a competing branch.”

Concurrent with the closure of the transaction, Valley National intends to restructure nearly $635 million worth of higher-cost Federal Home Loan Bank borrowings. The initiative along with the acquisition will be immediately accretive to Valley National’s earnings and tangible book value. Also, the bank’s Tier 1 Common Equity ratio will likely improve 50 basis points.

The deal is expected to double Valley National’s market share in Bergen County and enhance its presence in Hudson County. Also, it will strengthen the company’s capital base and accelerate “previously disclosed strategic initiatives.” Valley National had previously announced the sale-and-leaseback transaction and the Branch Transformation plan.

The company continues to witness steady revenue improvement, driven by organic and inorganic growth efforts. Over the years, the bank has expanded its footprint in New Jersey, Florida and New York through buyouts. These deals have been accretive to earnings and have expanded market share.

So far this year, shares of Valley National have rallied 33.3%, outperforming the industry’s growth of 15.4%. 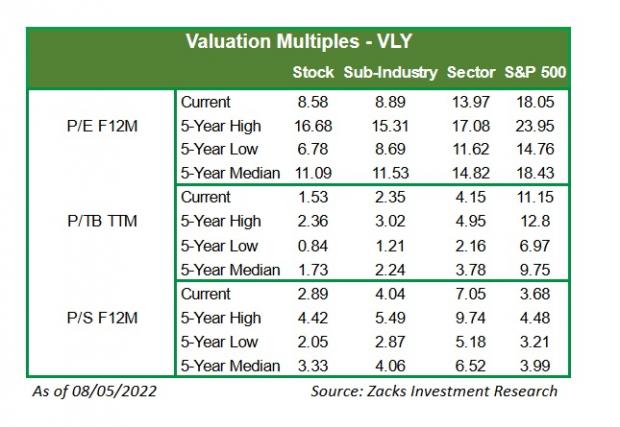 Of late, consolidation in the banking sector is on the rise, mainly driven by easing of stringent regulations. Several mid-sized banks, including Fifth Third Bancorp (FITB - Free Report) , SVB Financial Group (SIVB - Free Report) and Prosperity Bancshares, Inc (PB - Free Report) , have undertaken opportunistic buyouts, which will not only lead to geographic expansion but also help diversify revenue base.