Mylan (MYL) Launches Herceptin Biosimilar Ogivri in the US

This was the first biosimilar approved by the FDA and was unanimously recommended by the agency’s Oncologic Drugs Advisory Committee (ODAC).

Ogivri is approved for all indications of the branded drug, including the treatment of HER2-overexpressing breast cancer and metastatic stomach cancer (gastric or gastroesophageal junction adenocarcinoma). It is available in a 420 mg multi-dose vial and a 150 mg single-dose vial for patient dosing and treatment flexibility.

However, the biosimilar also contains a Boxed Warning for cardiomyopathy, infusion reactions, pulmonary toxicity and embryo-fetal toxicity like Herceptin.

The FDA approval of Ogivri was based on robust data, which showed that the drug is highly similar to Herceptin with no clinically meaningful differences between the biosimilar and the branded drug in terms of safety, purity and potency. Notably, the long-term results of the landmark HERITAGE study, including the overall survival data at 36 months, were presented at this year's American Society of Clinical Oncology (ASCO) Annual Meeting.

Meanwhile, the FDA recently approved two supplemental Biologics License Applications, expanding the manufacturing capability for Ogivri and Fulphila (biosimilar to Neulasta), which is Mylan and Biocon's first biosimilar in the United States.

Ogivri is the second biosimilar from the Mylan and Biocon partnership to be launched in the United States. Mylan has exclusive commercialization rights to the product in the United States, Canada, Japan, Australia, New Zealand, and the European Union and European Free Trade Association countries. Biocon has co-exclusive commercialization rights with Mylan for the product in the rest of the world.

Mylan and Biocon launched the world's first biosimilar, trastuzumab, in India in 2014. 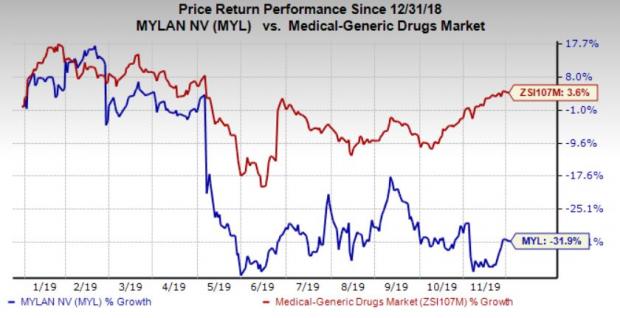 Meanwhile, the company’s decision to merge with Upjohn, Pfizer's (PFE - Free Report) off-patent branded and generic established medicines business, is encouraging, given the challenges faced by the generic business.

However, competition is stiffening for EpiPen as rival Teva Pharmaceutical (TEVA - Free Report) won FDA approval for the first generic version of Mylan’s EpiPen and EpiPen Jr, which in turn will unfavorably impact sales.