1. Through the launch of GOL Aerotech, Gol Linhas has extended its expertise in aircraft maintenance to third-party airlines across the globe. Some of the first customers of GOL Aerotech, which provides a new revenue-generating to the carrier, are Capital Group and Dubai Aerospace. The unit is expected to generate revenues of R$140 million in 2020. Notably, Gol Linhas has been performing MRO on its own single fleet of Boeing aircraft in this center for more than 13 years. (Read more: Gol Linhas' New Business Unit Offers Maintenance Services)

2. Delta announced plans to introduce codesharing for certain flights operated by affiliates of LATAM Airlines in Colombia, Ecuador and Peru. Subject to government approval, the codesharing is set to launch in the first quarter of 2020. Delta hopes to extend the codeshare in future by covering more destinations. Together with LATAM, the carrier plans to introduce frequent flyer program reciprocity and reciprocal lounge access. (Read more: Delta to Boost Connectivity Via Codesharing With LATAM)

Additionally, the carrier recorded an on-time performance (mainline) of 89.6% and a completion factor (mainline) of 99.93%. Delta’s passenger count rose 1.7% to 15.73 million in the month. However, cargo ton miles declined 4.1% in the same month on a year-over-year basis.

Reportedly, the service connecting Honolulu and its Japanese sister city — Fukuoka — has re-started after more than five years. In 2014, Hawaiian Airlines had scrapped the route owing to lackluster demand. The resumption of service on Nov 26, 2019, was celebrated extensively in Honolulu. Hawaiian Airlines will operate nonstop flights four-times a week, through an Airbus A330 aircraft, on this route. (Read more: Hawaiian Airlines Expands in Japan With New Fukuoka Flights)

5. In a bid to modernize its fleet, United Airlines (UAL - Free Report) announced its decision to purchase 50 new Airbus A321XLR jets. The new planes, delivery of which will start in 2024, are aimed at replacing/retiring its current ageing fleet of Boeing 757-200 planes. The new highly fuel-efficient jets are expected to be introduced into international service in 2024, allowing this Chicago-based carrier to fly to additional destinations in Europe from its East Coast hubs in Newark/New York and Washington. Notably, the new Airbus A321XLR jets reduce overall fuel burn per seat by roughly 30% compared with previous generation planes. Further, the carrier has decided to defer the delivery of Airbus A350s until 2027. 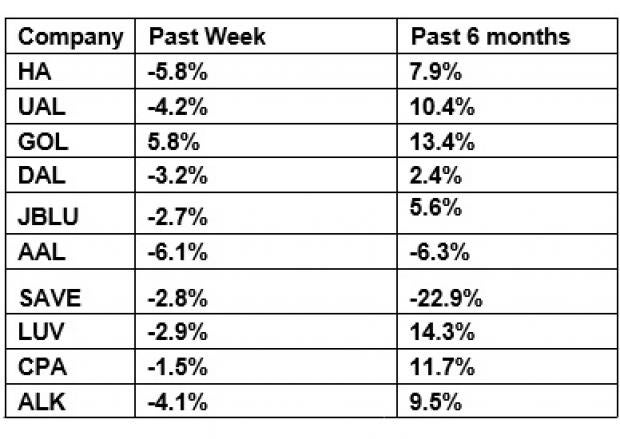 The table above shows that majority of the airline stocks traded in the red in the past week. Consequently, the NYSE ARCA Airline Index decreased 1.9% to $106.61 in the period. Over the course of six months, the index appreciated 8.1%.

Investors will look forward to November traffic reports from the likes of Allegiant Travel Company (ALGT - Free Report) in the coming days.